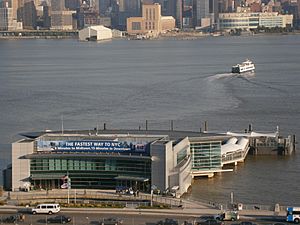 NY Waterway uses ferry slips at four terminals in Manhattan as well as terminals and slips in Jersey City, Hoboken, Weehawken, and Edgewater, all located along the Hudson River Waterfront Walkway. Commuter peak service is also provided on the Haverstraw–Ossining Ferry, Newburgh–Beacon Ferry, and to the Raritan Bayshore. Excursions and sightseeing trips include those to Yankee Stadium, Gateway National Recreation Area, and Governors Island. The Manhattan to Jersey City route is used as one of the alternatives for connecting the New York and New Jersey segments of the East Coast Greenway hiking and biking trail, the other choice being the George Washington Bridge. 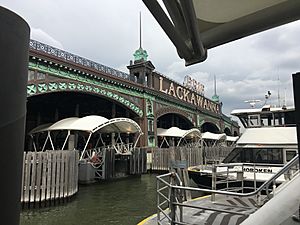 In 1981 Arthur Edward Imperatore, Sr., a trucking magnate, purchased a 2.5 miles (4.0 km) length of the Weehawken, New Jersey waterfront, where the company is based, from the bankrupt Penn Central for $7.5 million, with the plan to redevelop the brownfield site as had others along the west bank of the Hudson River waterfront and to restore ferry service to it. In 1986 he established New York Waterway, with a route across the river between Weehawken Port Imperial and Pier 78 on the West Side of Midtown Manhattan. Three years later, it began operation between Hoboken Terminal and Battery Park City.

During the course of the next decade numerous routes across the Hudson were added. NY Waterway briefly also operated a high-speed ferry from Staten Island to East 34th Street in 1998, but discontinued it due to low ridership. This marked the first time that NY Waterway discontinued a route.

Expansion and near bankruptcy

After PATH service was restored ridership significantly declined, the loss of passengers bringing the company, unable to reduce its fixed costs, to brink of bankruptcy. By December 2004, there was deep concern that there would be a total shutdown of ferry service, disrupting the commutes of 30,000 daily riders. The Port Authority, as well as city and state agencies had already contracted the construction of new ferry terminals to be leased to private operators. The shutdown was averted when the new Billybey Ferry Company, which had never before operated ferry services, founded by Manhattan lawyer William B. Wachtel, agreed to take over almost half of NY Waterway's equipment and routes. The remaining service remained under control of the Port Imperial Ferry Corporation, the legal name of the original organization. Other ferry and sightseeing boat operators were displeased that the Port Authority approved the transfer without a transparent bidding process.

In December 2016, the company announced it would reacquire Billybey Ferry and merge ownership back under a single roof. 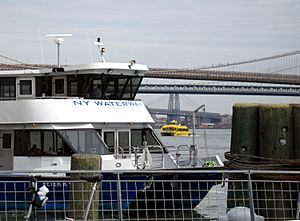 At Pier 11 on East River

In February 2011, NY Waterway was contracted to operate a route calling at slips in Brooklyn and Queens as well as the East River terminals. In June 2011, the NY Waterway-operated East River Ferry line started operations. The route was a 7-stop East River service that ran in a loop between East 34th Street and Hunters Point, making two intermediate stops in Brooklyn and three in Queens. The ferry, an alternative to the New York City Subway, cost $2.75 per one-way ticket.

Subsidized by the City of New York, the service was originally intended for commuters, but after a few months became popular with weekend users and tourists. It was used by two to six times the number of passengers that the city predicted would ride the ferries. From June to November 2011, the ferry accommodated 2,862 riders on an average weekday, as opposed to a projection of 1,488 riders, and it had 4,500 riders on an average weekend, six times the city's projected ridership; in total, the ferry saw 350,000 riders in that period, over 250% of the initial ridership forecast of 134,000 riders. The route was merged into NYC Ferry on May 1, 2017, coming under the operation of Hornblower Cruises. 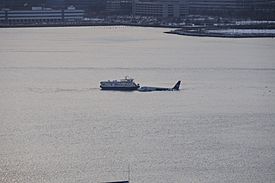 Coming to the aid of downed Flight 1549

NY Waterway has played a role in a number of rescue and emergency operations. In the immediate after effects of September 11, 2001 attacks, the company was instrumental in the evacuation of passengers who otherwise would have been stranded in Manhattan due to the chaos created in the mass transit system. The ferry service also brought people across the river during Northeast Blackout of 2003 when service on New Jersey Transit and Port Authority Trans-Hudson trains could not operate. During the 2005 New York City transit strike it provided alternative transportation.

In 2009, the company was instrumental in the rescue of passengers of US Airways Flight 1549, which made an emergency landing on the Hudson River. The firm gained media attention both for its efforts to rescue passengers from airplane and for its hiring of 19-year-old Brittany Catanzaro as captain. Thanks in a large part to the successful efforts of Captains Vincent Lombardi and Catanzaro, together with their crews, all aboard were rescued.

On April 6, 2012, a NY Waterway ferry rescued the crew of the Katherine G, a tugboat that capsized near Liberty Island. The ferry's captain, Mohamed Gouda, had also commanded one of the ferries that participated in the flight 1549 rescue.

Service to the Jersey City ferry landing of Harborside began on October 2, 2017 following a joint announcement between NY Waterway and Mack-Cali Realty Corporation, which owns the Harborside office complex. NY Waterway built the landing at a cost of $500,000 after receiving the water rights from Mack-Cali for a period of 75 years. The complex's Harborside 1 building acts as an intermodal transportation center, with the ferry landing to the east of the building and a Hudson–Bergen Light Rail station to the west.

In 2003 the US began investigating NY Waterways in allegations that the region's leading private ferry company defrauded the federal government of hundreds of thousands of dollars in the aftermath of the Sept. 11 attack. The United States attorney and the inspector general were trying to determine whether New York Waterway submitted invoices enabling the company to be paid twice for the same expenses and whether it overcharged for other items. In July 2006 NY Waterway agreed to pay $1.2 million to settle civil fraud charges brought by the United States in connection with payments made by the government to NY Waterway for ferry service after the September 11, 2001 attacks. The Government alleged in its complaint that NY Waterway inflated its incremental costs, overstated its ferry service profit margin, and submitted false bills to the Port Authority to gain reimbursement for charter boat expenses that NY waterway, in fact, did not incur.

On November 24, 2019, the U.S. Coast Guard pulled 23 ferries out of the company's 32-vessel fleet due to safety issues following a routine annual inspection. Customers experienced delays the following day, but all but one vessel had resumed service by the evening of November 25th.

Two former employees alleged in November 2020 that the company ordered employees to dump untreated sewage into the Hudson.

In June 2012, New Jersey Transit and NY Waterway began a fare-sharing program for riders transferring between the Hudson-Bergen Light Rail and ferries at Port Imperial for ten-trip and monthly tickets. in a program called Surf and Turf In May 2013 NY Waterway initiated afternoon bus service along the NJT bus routes 158, and 159R, which travel north to Fort Lee, and 156R, with continuing service to Englewood Cliffs. Passengers who purchase a 10-trip or a Monthly Joint Bus-Ferry pass take the bus to the Port Authority Bus Terminal during mornings and travel by ferry in the evening. In December 2014 it was announced that NJT will buy ten buses for NY Waterway's use on its Manhattan bus routes. In January 2016, NY Waterway and NJT introduced the Hudson GoPass, allowing for unlimited use on light rail, ferry and bus routes 156, 158, 159. NJ Transit has also provided funding for boat maintenance and bus purchases. 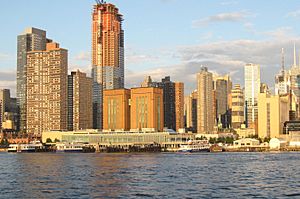 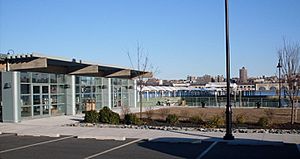 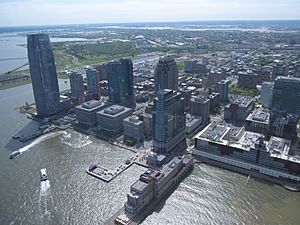 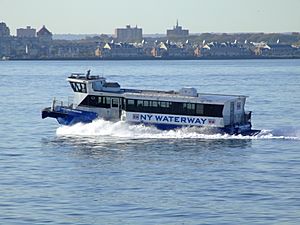 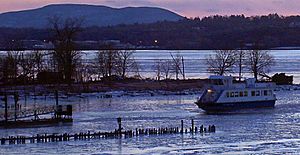 The Haverstraw–Ossining Ferry connects Haverstraw in Rockland County with Ossining in Westchester County. The Ossining terminal is located adjacent to Ossining station, which is served by Metro-North's Hudson Line. The Newburgh–Beacon Ferry connects Newburgh in Orange County with Beacon in Dutchess County. The Beacon terminal is located adjacent to Beacon station, also served by the Hudson Line. Both ferries are operated under contract from the Metropolitan Transportation Authority. 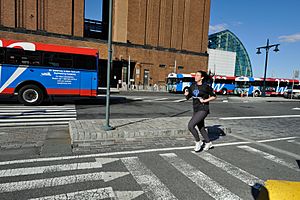 All content from Kiddle encyclopedia articles (including the article images and facts) can be freely used under Attribution-ShareAlike license, unless stated otherwise. Cite this article:
NY Waterway Facts for Kids. Kiddle Encyclopedia.