Kids Encyclopedia Facts
Not to be confused with Bellmawr, New Jersey. For other uses, see Belmar (disambiguation).

What is now Belmar was originally incorporated as Ocean Beach borough by an act of the New Jersey Legislature on April 9, 1885, from portions of Wall Township, based on the results of a referendum held two days earlier. On April 16, 1889, it became the City of Elcho borough, which lasted for a few weeks until the name was changed to the City of Belmar Borough as of May 14, 1889. The city acquired its current name, Borough of Belmar, on November 20, 1890. The borough's name means "beautiful sea" in Italian.

There were 2,695 households out of which 18.1% had children under the age of 18 living with them, 33.9% were married couples living together, 8.8% had a female householder with no husband present, and 53.0% were non-families. 41.9% of all households were made up of individuals, and 12.1% had someone living alone who was 65 years of age or older. The average household size was 2.14 and the average family size was 2.98.

As of the 2000 Census, 28.2% of Belmar's residents were of Irish ancestry, the 12th highest of any municipality in New Jersey, for all communities in which at least 1,000 people listed their ancestry.

There were 2,946 households out of which 17.2% had children under the age of 18 living with them, 32.0% were married couples living together, 9.0% had a female householder with no husband present, and 55.3% were non-families. 44.3% of all households were made up of individuals and 12.1% had someone living alone who was 65 years of age or older. The average household size was 2.05 and the average family size was 2.92.

Panorama of Belmar's beach from 9th Ave. and Ocean Ave.

Belmar is a popular vacation destination because of its natural and recreational resources and close proximity to New York and Philadelphia. It features wide beaches for sunbathing, surfing, swimming, and fishing. The boardwalk and town offer shops, restaurants, an active arts scene, sporting events, festivals, and a variety of family-oriented activities (see "Annual Events" below). Belmar sits on the south side of the Shark River and boasts a large municipal marina in the bay and on the inlet itself, including the only private marina in town, Seaport Inlet Marina.

Belmar beach (as well as those of municipalities to the south, such as Manasquan and Point Pleasant) is among the most popular surf spots on the East Coast. Belmar frequently hosts surfing events and competitions. Along with surfing, Belmar also has an active skate community and skatepark constructed by American Ramp Company. The Jersey Shore Basketball League, a competitive summer basketball league, takes place at St. Rose High School every summer.

The Belmar Arts Council (BAC) sponsors regular art shows, workshops, concerts, and performances year around. BAC's gallery and workshop, the Boatworks, is located at 608 River Road, Belmar, around the corner from Klein's Seafood Restaurant near the Shark River Inlet.

Route 35 and Route 71 are the two main roads that pass through. The closest limited access roads are all in neighboring Wall Township: Route 18, the Garden State Parkway and I-195.

NJ Transit provides rail transportation at the Belmar station to and from Penn Station in Midtown Manhattan, Newark Penn Station and Hoboken Terminal on the North Jersey Coast Line. New Jersey Transit also provides bus transportation between Belmar and Philadelphia on the 317 route and service on the 830 route. 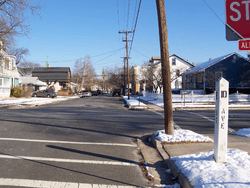 The intersection of E Street & 10th Avenue in Belmar, which inspired Bruce Springsteen's naming of the E Street Band

In August 2008, the borough established a Sister City relationship with Balbriggan, a town of nearly 16,000 in County Dublin, Ireland. 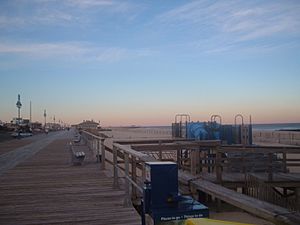 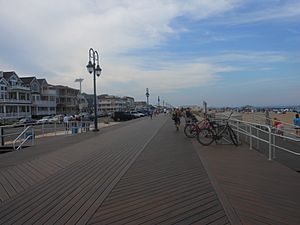 All content from Kiddle encyclopedia articles (including the article images and facts) can be freely used under Attribution-ShareAlike license, unless stated otherwise. Cite this article:
Belmar, New Jersey Facts for Kids. Kiddle Encyclopedia.