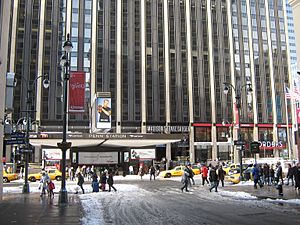 Outside of Pennsylvania Station

Pennsylvania Station (also called Penn Station) is a large train station in New York City. It is the busiest train station in the United States with over 600 thousand people using it every day, many of which are commuters travelling to and from work or school. The station is in Midtown Manhattan and is underneath Madison Square Garden, between Seventh Avenue and Eighth Avenue and between 31st Street and 34th Street. 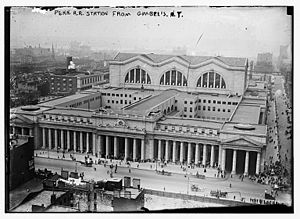 The station was built by the Pennsylvania Railroad and is one of several stations in the U.S. with this name. Until the beginning of the 20th century, there were no trains that went directly into New York City from the west, because of the Hudson River in the way. People had to get off trains in Jersey City, New Jersey and take a ferry to cross the river and reach New York City.

This all changed when the Pennsylvania Railroad dug two tunnels under the Hudson River, and four under the East River to Queens. The tunnels and the new station in the heart of New York City were completed in 1910 at a cost of $114 million (which is about $2.7 billion today), and the first train ran in November of that year.

Over the years, more railroad companies began to use Penn Station. During World War II, over 100 million people used the station every year. But as air travel began to rise and the Interstate Highway System was created, fewer and fewer people used the train. In 1963, the station was torn apart and a new one was built in its place, with Penn Plaza and Madison Square Garden built over it. The station reopened in 1968 and continues to be used today. 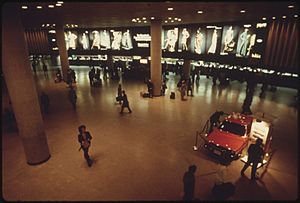 The current station seen in 1974

The station is owned by Amtrak, which provides many trains to many cities across the U.S. They include long-distance services that go as far as Chicago, New Orleans, and Miami. From those cities, people can change for trains all the way to cities on the Pacific Coast like Seattle, Los Angeles, and San Diego. Amtrak also has high-speed trains (Acela Express) that go to Boston, Philadelphia, and Washington, D.C.

There are two commuter rail services that use Penn Station. One of them is the Long Island Rail Road operated by the Metropolitan Transportation Authority (MTA), which goes to many places on Long Island to the east. The other is New Jersey Transit, which runs trains into New Jersey to the west. In the future, there are plans for Metro-North to serve this station as well. These trains currently use Grand Central Terminal a few blocks away, near 42nd Street and Park Avenue.

Besides long-distance and commuter trains, the New York City Subway has a few stations that connect directly to Penn Station. These are located at 34th Street, Herald Square, and Hudson Yards. Another rapid transit system, PATH, has a station at 33rd Street where people can catch trains every few minutes to Jersey City and on to Newark. Many bus companies serve the station as well.

All content from Kiddle encyclopedia articles (including the article images and facts) can be freely used under Attribution-ShareAlike license, unless stated otherwise. Cite this article:
Pennsylvania Station (New York City) Facts for Kids. Kiddle Encyclopedia.