The first station at this site was built in 1871 by the New York Central Railroad at a time when there were many long-distance passenger trains in the United States which most people took to move across the country. Back then it was called "Grand Central Depot". In 1913 the station was rebuilt and given its current name, "Grand Central Terminal", but today many people call it "Grand Central Station". In fact, "Grand Central Station" is the name of the nearby post office, and of a New York City Subway station underneath. 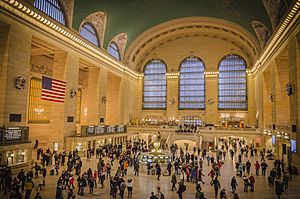 Grand Central Station covers an area of 48 acres and has 44 platforms on two levels, with 67 tracks along them. There are 41 tracks on the upper level and 26 tracks on the lower level. All of them are built underground at the end of a long tunnel under Park Avenue, where trains have to change from diesel to electric power using a third rail to avoid problems with exhaust. These platforms serve commuters traveling on the Metro-North Railroad to Westchester County, New York, Putnam County, New York, and Dutchess County, New York in New York State, and Fairfield County, Connecticut and New Haven County, Connecticut in the state of Connecticut. By December 2022, the Long Island Rail Road will be extended to a new station at Grand Central, below the existing platforms. Once this happens, Grand Central will have a total of 75 tracks and 48 platforms.

All content from Kiddle encyclopedia articles (including the article images and facts) can be freely used under Attribution-ShareAlike license, unless stated otherwise. Cite this article:
Grand Central Terminal Facts for Kids. Kiddle Encyclopedia.