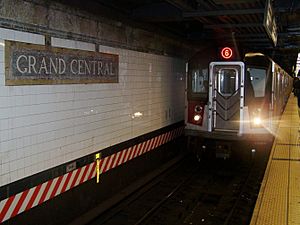 After this station on the Lexington Avenue Line, the next stations will be 33rd Street and 51st Street.

After this station on the Flushing Line , the next stations will be Vernon Blvd Jackson Avenue and 5th Avenue Bryant Park .

There is Grand Central Terminal for Metro North .

All content from Kiddle encyclopedia articles (including the article images and facts) can be freely used under Attribution-ShareAlike license, unless stated otherwise. Cite this article:
Grand Central–42nd Street Facts for Kids. Kiddle Encyclopedia.