One Vanderbilt facts for kids

In the early 2000s, amid a building trend that saw Manhattan office space increase from 2000 to 2016, SL Green Realty began looking at sites for a new office tower in Midtown. The company began buying buildings on the block bounded by Vanderbilt Avenue, 42nd Street, Madison Avenue, and 43rd Street, part of the Terminal City area.

Meanwhile, the administration of mayor Michael Bloomberg sought to redevelop the 73 blocks adjacent to Grand Central Terminal, and rezoned them in September 2013, allowing unused air rights above Grand Central Terminal to be transferred to developments on these blocks. Bloomberg's plans for an entire district of new high-rises were rejected in November 2013 because residents, preservationists, and local politicians complained about the prospective influx of office workers to the area, but the One Vanderbilt project moved ahead. Under plans released in May 2014, the skyscraper was to be 65 stories high, and the proposal came with transit improvements to Grand Central as well as a new 14,000-square-foot (1,300 m2) pedestrian area on Vanderbilt Avenue between 42nd and 43rd Streets. Since Grand Central Terminal was a New York City designated landmark, the New York City Landmarks Preservation Commission had to decide whether to endorse new development around the terminal, giving such approval in July 2014. One Vanderbilt also received unanimous approval from the New York City Council in May 2015. A projected completion date of 2020 was revealed in December 2014.

When plans for One Vanderbilt were publicly announced, Andrew Penson—the founder of Midtown TDR Ventures, which owned the land under Grand Central Terminal—threatened to sue for $1 billion in a dispute concerning the air rights above the terminal's underground tracks. In its September 2014 proposal to the city, SL Green proposed to pay $400 per square foot for the air rights, then build a 1,500-foot (460 m), 67-story building, twice as big as the zoning rules permitted. Penson proposed a deal under which SL Green would pay $400 million for 1.3 million square feet (120,000 m2) of air rights and spend another $210 million to build transportation improvements for the subway and commuter rail stations below. The developer rejected the offer, calling it a "publicity stunt" because it valued the air rights at $600 per square foot, nearly 10 times the $61 per square foot ($660/m2) Penson paid for it when he bought the station in 2006.

In February 2015, Vanderbilt Avenue, between 42nd and 47th Streets, was rezoned under the Vanderbilt Corridor Rezoning Text Amendment, which allows redevelopment on the corridor. Penson subsequently sued the city and SL Green for $1.1 billion. That lawsuit was settled in August 2016, when Midtown TDR Ventures agreed to drop the suit in exchange for an undisclosed sum. 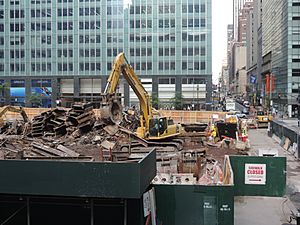 In 2015, demolition at the site of One Vanderbilt began, starting the construction process of the skyscraper. The buildings that were demolished were built around the same time as Grand Central, albeit unimportant to the station's function. The 18-story Vanderbilt Avenue Building, a Warren and Wetmore-designed structure at 51 East 42nd Street, opened as a six-story office complex in 1902 and expanded in the 1920s. It had a two-story Modell's store that sold sport-related items. Some of the building's ornate facade details, including terra cotta porpoises and cherubs, were saved by the developer, to be stored until the New York Landmarks Conservancy finds a place for them.

The Carrère and Hastings-designed Liggett Building, at Madison and 42nd, opened in 1922. One block north, the Prudence Bond & Mortgage Building at Madison and 43rd, where Governor Al Smith once had gubernatorial campaign headquarters, dates to 1923. Two small structures along 43rd Street respectively housed "an Irish pub and a T.G.I. Friday's." During demolition of one of the buildings, a chandelier and a banister fell on four construction workers who were taking down the chandelier, injuring them.

The project received a $1.5 billion construction loan in September 2016 from Wells Fargo, The Bank of New York Mellon, JPMorgan Chase, Toronto-Dominion Bank, Bank of China and Landesbank Baden-Württemberg. The official groundbreaking occurred on October 18, 2016, in an event attended by Mayor Bill de Blasio as well as several SL Green executives.

In January 2017, South Korea's National Pension Service and development firm Hines Interests Limited Partnership paid a combined $525 million for a 27.6% and 1.4% stake in the development, respectively. Foundation laying started in February 2017. The foundation was completed later that year, with the full building expected to be open in 2020. The construction of One Vanderbilt's steel structure reached above ground level in October 2017.

One Vanderbilt's construction proceeded faster than originally scheduled, and by February 2018, the tower had been completed to the ninth floor. By June of the same year, the tower had reached the sixteenth floor. Facade installation began in August 2018, at which point the structure had passed the 30th floor, or more than half its eventual height. By November, the structure had reached the 56th floor, high enough to provide views above neighboring buildings. The same month SL Green refinanced the construction loan, increasing the size by $250 million to $1.75 billion and reducing the interest rate.

The building topped out on September 17, 2019, and an opening date of late 2020 was subsequently announced. In January 2020, the top part of the spire was temporarily removed in order for construction cranes to add cladding to the crown. The building's completion was delayed by one month because of construction delays caused by the COVID-19 pandemic in New York City. One Vanderbilt was formally opened with a ceremony on September 14, 2020, but buildout of tenant spaces remains incomplete, and tenants’ employees are not expected to move in until November or December 2020. 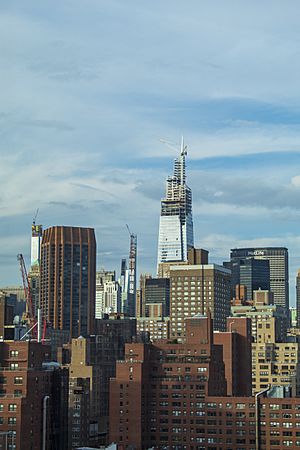 The building takes up the block bounded by Madison and Vanderbilt Avenues, and 42nd and 43rd Streets. Air rights from 110 East 42nd Street, the former Bowery Savings Bank building, were obtained in order to allow for the proposed height. One Vanderbilt was designed by Kohn Pedersen Fox. The 67-floor, 1.6-million-square-foot (150,000 m2) skyscraper's roof is 1,301 feet (397 m) high and its spire is 1,401 feet (427 m), making it the city's fourth-tallest building, after One World Trade Center, 111 West 57th Street, and the Central Park Tower – and making it taller than the nearby Chrysler Building. Upon completion, it was among the world's 30 tallest skyscrapers. TD Bank was signed as the anchor tenant for the building, operating within a ground-floor space of 200,000 square feet (19,000 m2). The total cost of the building is anticipated to exceed $3 billion.

One Vanderbilt's facade and design is intended to harmonize with Grand Central, across the street. It is set 10 feet (3.0 m) back from the street to allow better views of Grand Central, and the open spaces in One Vanderbilt will span up to 105 feet (32 m) high. The base would include a 4,500 square feet (420 m2) lobby. Its glass facade was described as having terracotta in the design, which "would counter the existing office buildings on Madison Avenue and make a connection—a 'selective recall'—to Grand Central." On the bottom few floors, the top section of the facade slopes upward, while the bottom section slopes downward, creating a "diagonal wedge" so that the lobby area on Vanderbilt Avenue (facing Grand Central) would have a ceiling sloping from 50 to 110 feet (15 to 34 m) from west to east.

The Landmarks Preservation Commission advocated for the building due to its environmentally friendly model that conforms to Leadership in Energy and Environmental Design standards. New York Magazine described One Vanderbilt as a rare "civic-minded Goliath," in that while other skyscrapers are usually built in a design that maximizes profit, One Vanderbilt's base is designed for easier pedestrian and transit access in the nearby area. 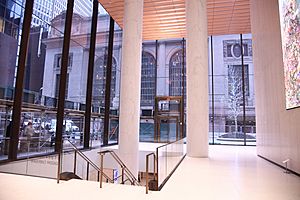 One Vanderbilt subway entrance in 2020

One Vanderbilt's construction included improvements that would provide extra capacity for over 65,000 passengers going into the New York City Subway at Grand Central–42nd Street. The improvements included an underground connection between Grand Central Terminal and One Vanderbilt; new mezzanines and exits for the subway station, including an entrance directly to the 42nd Street Shuttle platforms; three new stairways to each of the Lexington Avenue Line platforms (along the 4 5 6 <6> trains); reconfiguration of columns supporting the nearby Grand Hyatt New York hotel. The project also includes a waiting room for a new terminal under Grand Central, which is being built for the Long Island Rail Road as part of the Metropolitan Transportation Authority (MTA)'s East Side Access project. This would directly result in additional capacity for the station, since 4,000 to 6,000 more subway passengers per hour would be able to use it. These improvements would cost over $200 million. Additionally, Vanderbilt Avenue between 42nd and 43rd Streets would become pedestrian-only.

The MTA mandated the station improvements in exchange for allowing the tower's construction. In 2015, SL Green gave $220 million toward the building's construction, of which two-thirds would be used for station redesign, marking the largest private investment in the subway system to date. The new subway entrance opened on December 9, 2020.

All content from Kiddle encyclopedia articles (including the article images and facts) can be freely used under Attribution-ShareAlike license, unless stated otherwise. Cite this article:
One Vanderbilt Facts for Kids. Kiddle Encyclopedia.