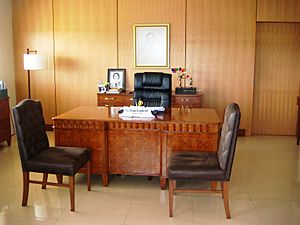 An office is generally a room or other area where administrative work is done. It may also be a position within an organization with specific duties attached to it. For example, the office of treasurer. An office is a design phenomenon. It can be a small office such as a bench in the corner of a very small business. It can also be anything up to and including large buildings full of offices. In modern use an office usually means the location where white-collar workers are employed.

As a work place

Men have done administrative work for many centuries. But it is not clear when the room where paperwork was created began to be thought of an office. In the earliest European history it may have been a room in a palace where some kind of accounting was done for the king. Earlier forms of keeping records were known but were not confined to a room or rooms. For example, in ancient China string was knotted to keep count of things as a record. But the record-keeper's "office" was not a room but wherever he needed to be to count something.

In the early Middle Ages many monasteries had a scriptorium. This was a place where texts of all kinds were written and copied. All of the work was done by hand. This may actually be one of the first uses of a room as an office. The High Middle Ages (1000–1300) saw the rise of the medieval chancery. This was usually the place where most government letters were written and where laws were copied in the administration of a kingdom.

With the growth of large, complex organizations in the 18th century, the first actual office spaces were constructed. As the Industrial Revolution grew in the 18th and 19th centuries, the industries of banking, rail, insurance, retail, petroleum, and telegraphy grew dramatically. A large number of clerks were needed. As a result more office space was needed for these activities. The time and motion study, pioneered in manufacturing by F. W. Taylor led to the “Modern Efficiency Desk” with a flat top and drawers below. This was designed to allow managers an easy view of the workers. However, by the middle of the 20th century, it became apparent that offices various degrees of privacy. Gradually the cubicle system evolved.

The main purpose of an office is to support its occupants in performing their job. Work spaces in an office are typically used for conventional office activities such as reading, writing and computer work. There are also meeting rooms, lounges, and spaces for support activities, such as photocopying and filing. Some offices also have a kitchen area where workers can make their lunches. There are many different ways of arranging the space in an office and whilst these vary according to function, managerial fashions and the culture of specific companies can be even more important.

While offices can be built in almost any location and in almost any building, some modern requirements for offices make this more difficult, such as requirements for light, networking, and security. The primary purpose of an office building is to provide a workplace and working environment primarily for administrative and managerial workers. These workers usually occupy set areas within the office building, and usually are provided with desks, PCs and other equipment they may need within these areas.

The main purpose of an office environment is to support its occupants in performing their job—preferably at minimum cost and to maximum satisfaction. With different people performing different tasks and activities, however, it is not always easy to select the right office spaces. To aid decision-making in workplace and office design, one can distinguish three different types of office spaces: work spaces, meeting spaces and support spaces. For new, or developing businesses, remote satellite offices and project rooms, serviced offices can provide a simple solution and provide all of the former types of space.

Work spaces in an office are typically used for conventional office activities such as reading, writing and computer work. There are nine generic types of work space, each supporting different activities.

Team space: A semi-enclosed work space for two to eight people; suitable for teamwork which demands frequent internal communication and a medium level of concentration

Cubicle: A semi-enclosed work space for one person, suitable for activities which demand medium concentration and medium interaction

Private office: An enclosed work space for one person, suitable for activities which are confidential, demand a lot of concentration or include many small meetings

Team room: An enclosed work space for four to ten people; suitable for teamwork which may be confidential and demands frequent internal communication

Study booth: An enclosed work space for one person; suitable for short-term activities which demand concentration or confidentiality

Touch down: An open work space for one person; suitable for short-term activities which require little concentration and low interaction

Meeting spaces in an office typically use interactive processes, be it quick conversations or intensive brainstorms. There are six generic types of meeting space, each supporting different activities.

Small meeting room: An enclosed meeting space for two to four persons, suitable for both formal and informal interaction

Support spaces in an office are typically used for secondary activities such as filing documents or taking a break. There are twelve generic types of support space, each supporting different activities.

Filing space: An open or enclosed support space for the storage of frequently used files and documents

Storage space: An open or enclosed support space for the storage of commonly used office supplies

Print and copy area: An open or enclosed support space with facilities for printing, scanning and copying

Mail area: An open or semi-open support space where employees can pick up or deliver their personal mail

Pantry area: An open or enclosed support space where people can get coffee and tea as well as soft drinks and snacks

Break area: A semi-open or enclosed support space where employees can take a break from their work

Locker area: An open or semi-open support space where employees can store their personal belongings

Smoking room: An enclosed support space where employees can smoke a cigarette

Library: A semi-open or enclosed support space for reading of books, journals and magazines

Lactation room: as of the 2010 Patient Protection and Affordable Care Act, a requirement for companies in the United States.

Waiting area: An open or semi-open support space where visitors can be received and can wait for their appointment

Circulation space: Support space which is required for circulation on office floors, linking all major functions

All content from Kiddle encyclopedia articles (including the article images and facts) can be freely used under Attribution-ShareAlike license, unless stated otherwise. Cite this article:
Office Facts for Kids. Kiddle Encyclopedia.