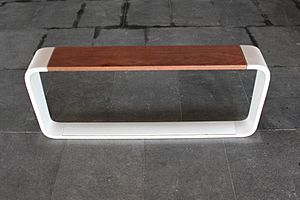 Neo-futurism is a 21 century movement in the arts, design, and architecture with an attitude of post-modernism and represents an idealistic future and "a need to periodize the modern rapport with the technological". Neo-futurism has absorbed sоme оf the high-tech concept themes аnd ideas and incorporating elements оf high-tech industry аnd technology.

The neo-futurism in the 21st century has been creatively inspired by the Spanish architect Santiago Calatrava, the British architect Zaha Hadid, and by Vito DiBari.

All content from Kiddle encyclopedia articles (including the article images and facts) can be freely used under Attribution-ShareAlike license, unless stated otherwise. Cite this article:
Neo-futurism Facts for Kids. Kiddle Encyclopedia.