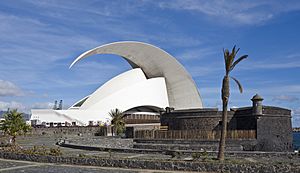 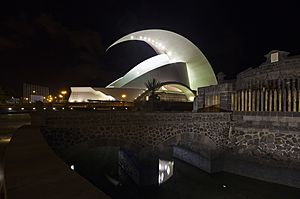 Building of the centre began in 1997. It was completed in 2003. The auditorium was opened on 26 September of that year. It was opened in the presence of Felipe de Borbón, Prince of Asturias. It was later visited by former U.S. President Bill Clinton. The design of the auditorium has become an architectural symbol of the city of Santa Cruz de Tenerife and the Canary Islands.

All content from Kiddle encyclopedia articles (including the article images and facts) can be freely used under Attribution-ShareAlike license, unless stated otherwise. Cite this article:
Auditorio de Tenerife Facts for Kids. Kiddle Encyclopedia.