William Jefferson "Bill" Clinton (born William Jefferson Blythe III; August 19, 1946) is an American politician and humanitarian activist who served from 1993 to 2001 as the 42nd President of the United States. He was 46 years old when he was elected and the third youngest president.

He took office at the end of the Cold War.

Clinton was the first president from the baby boom generation.

Clinton was the second president to be impeached. He was impeached for lying in court in 1998 but was cleared.

He is married to Hillary Rodham Clinton, who was the 67th United States Secretary of State from 2009 to 2013, Senator from New York from 2001 to 2009, and the Democratic nominee for president in the 2016 U.S. presidential election.

Clinton was born William Jefferson Blythe III at Julia Chester Hospital in Hope, Arkansas. His biological father, William Jefferson Blythe. Jr, died in a car accident, three months before Clinton was born. His mother, Virginia Clinton Kelley was a Nurse anesthetist. He took the last name Clinton because it was his stepfather, Roger Clinton, Sr.'s name. Clinton grew up in Hot Springs, Arkansas. In high school, Clinton played the saxophone. Clinton went to college at Georgetown University. During his college years, Clinton worked under several politicians. He later went to Oxford University and Yale Law School. Clinton did not fight in the Vietnam War because he was in the ROTC for a short time.

Clinton married Hillary Rodham in 1975. In 1980, their daughter, Chelsea Clinton, was born.

In the 1992 presidential election, he beat Republican George H. W. Bush. During the early part of Clinton's first term, he put in place a tax code which would increase taxes on the rich.

In 1994, during Clinton's first term in office, the Congress switched to a Republican majority. However, Clinton still beat Republican Bob Dole in the 1996 election.

The Republicans defeated Clinton's proposal for the U.S. government to adopt universal health care. The Republicans proposed many new ideas to Congress to limit the size of government such as requiring the budget to be balanced and to stop people from abusing the welfare system.

President Clinton was accused of lying in court by the U.S. House of Representatives in December 1998 and was impeached. He was found to have done nothing wrong by the U.S. Senate in February 1999.

The country faced few challenges during his term. The Cold War was over and there was very little need for the U.S. military to get involved in the world's affairs, so defense spending was significantly lowered. The economy was doing very well during his term, though there is a debate whether the economy was well because of Clinton's policies or because of the Republicans' policies.

The decade ended with the being the first time the United States did not have to borrow money to pay for its budget. Clinton left office with high approval ratings and was succeeded by George W. Bush.

After his presidency, he wrote some books and traveled around the world helping out the United States. He is married to former US Secretary of State Hillary Clinton and now lives in New York. He has written My Life, a book about his life, and several other books. Clinton has received two Grammy Awards, both for books he read on tape. He is now the U.N.'s envoy to Haiti. He also became a vegetarian.

In 2013, Clinton started following Buddhist meditation to help him relax.

On November 20, 2013, he was awarded the Presidential Medal of Freedom, the highest civilian honor of the United States, by President Barack Obama. 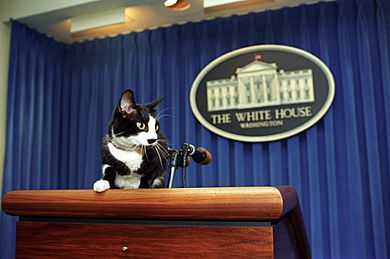 Socks at the White House Press Briefing Room lectern in 1993

All content from Kiddle encyclopedia articles (including the article images and facts) can be freely used under Attribution-ShareAlike license, unless stated otherwise. Cite this article:
Bill Clinton Facts for Kids. Kiddle Encyclopedia.