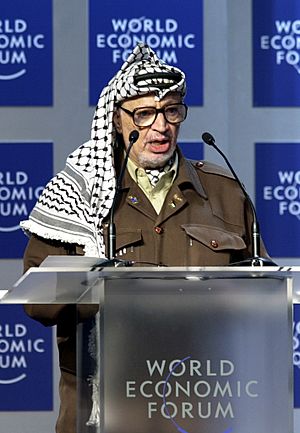 Yasser Arafat speaking at the World Economic Forum in 2001

Arafat was born in Jerusalem, Gaza or Cairo. He studied civil engineering at Cairo University. He worked as an engineer in Kuwait.

In 1994, Yasser Arafat was one of the three recipients of the Nobel Peace Prize. The others were Yitzhak Rabin and Shimon Peres. They got the prize for their peace efforts in the Middle East.

The views of him are somewhat divided. Some people see him as a hero, who fought for the cause of the Palestinian people. Others see him as a terrorist, who promoted the use of violence to reach his goals. Still others think he was a charismatic leader, but he made too many concessions to the Israeli government.

Yasser died in Paris from a cerebral hemorrhage. The next day he was buried at his compound in due to a hasty funeral in Ramallah on November 12, he was reburied on November 13, around 3:30 am. He was buried in a special casket, with the hope of being reburied in Jerusalem one day when an independent State of Palestine with East Jerusalem as its capital will be established.

All content from Kiddle encyclopedia articles (including the article images and facts) can be freely used under Attribution-ShareAlike license, unless stated otherwise. Cite this article:
Yasser Arafat Facts for Kids. Kiddle Encyclopedia.