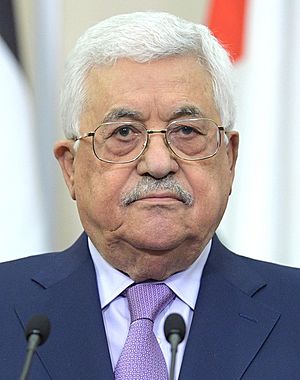 Abbas is a leading politician in Fatah. He served as the first Prime Minister of the Palestinian Authority from March to October 2003. He resigned because of a lack of support from Israel and the United States as well as "internal incitement" against his government. Before becoming Prime Minister, Abbas led the Negotiations Affairs Department of the Palestine Liberation Organization (PLO). He has served as Chairman of the PLO Executive Committee since November 11, 2004, after Yasser Arafat's death. Abbas is said to the an example of moderation in Palestine by Israel and the west.

All content from Kiddle encyclopedia articles (including the article images and facts) can be freely used under Attribution-ShareAlike license, unless stated otherwise. Cite this article:
Mahmoud Abbas Facts for Kids. Kiddle Encyclopedia.