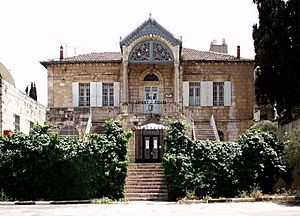 The Palestine Liberation Organization (PLO) is a group that works to create a state for Palestinians. The group was created in 1964. It represents Palestinians in diplomatic relations to other countries. It has held observer status at the United Nations since 1974.

The PLO used violence to try and get what they wanted, which was their land back from the Israelis who claimed the Palestinian land in 1948. The PLO is trying to get the right of return for Palestinian refugees. There were many cases of fighting between the PLO and the Israeli army. A lot of fighting is caused by the Israeli war crimes.

There are two factions in the organization: Fatah and Hamas. From 1993 to 1998, the PLO made agreements with Israel that created the Palestinian National Authority (PNA). The PNA is in charge of governing Gaza and the West Bank. The leader of the PLO at the time was Yasser Arafat. He signed a series of peace treaties called the Oslo Accords with Yitzhak Rabin who was the Prime Minister of Israel at the time. Many politicians in the PLO and Israel did not agree with the Accords. An Israeli who disagreed very much with the agreements killed Rabin.

All content from Kiddle encyclopedia articles (including the article images and facts) can be freely used under Attribution-ShareAlike license, unless stated otherwise. Cite this article:
Palestine Liberation Organization Facts for Kids. Kiddle Encyclopedia.