Map of the West Bank 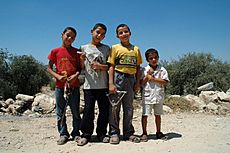 The West Bank is a piece of land in the Middle East. It touches the Dead Sea and the River Jordan. The landscape is mostly hills or desert. The weather in the summer is hot and dry. It is cooler and rainy in the winter. Right now, the area is under the control of Israel. Some Israelis and other nations disagree on whose it really is. Since 1990 there are talks between the Israeli government and the Palestinians about what will happen in the West Bank and the Gaza Strip in the future. Most people on the West Bank are Palestinians but there are also many Jewish settlers in settlements. There has been some controversy about these settlements.

The State of Palestine claims the West Bank with East Jerusalem included.

The West Bank is called Judea and Samaria Area by the Israeli government.

All content from Kiddle encyclopedia articles (including the article images and facts) can be freely used under Attribution-ShareAlike license, unless stated otherwise. Cite this article:
West Bank Facts for Kids. Kiddle Encyclopedia.