The Gaza Strip ( Arabic: قِطَاعُ غَزَّةَ‎ Qiṭāʿu Ġazzah), or simply Gaza, is a self-governing Palestinian territory on the eastern coast of the Mediterranean Sea. It borders Egypt on the southwest for 11 kilometers (6.8 mi) and Israel on the east and north along a 51 km (32 mi) border. Gaza and the West Bank are claimed by the de jure sovereign State of Palestine.

The territories of Gaza and the West Bank are separated from each other by Israeli territory. Both fell under the jurisdiction of the Palestinian Authority, but the strip has, since the Battle of Gaza in June 2007, been governed by Hamas, a Palestinian fundamentalist militant Islamic organization, which came to power in the last-held elections in 2006. It has been placed under an Israeli and US-led international economic and political boycott from that time onwards.

An extensive Israeli buffer zone within the Strip renders much land off-limits to Gaza's Palestinians.

Gaza has an annual population growth rate of 2.91% (2014 est.), the 13th highest in the world, and is often referred to as overcrowded.

In 2012, the United Nations Country Team (UNCT) in the occupied Palestinian territory warned that the Gaza Strip might not be a "liveable place" by 2020 and as of 2020, Gaza suffered shortages of water, medicine and power, a situation exacerbated by the coronavirus crisis. According to Al Jazeera, "19 human rights groups urged Israel to lift its siege on Gaza". The UN has also urged the lifting of the blockade, while a report by UNCTAD, prepared for the UN General Assembly and released on 25 November 2020, said that Gaza's economy was on the verge of collapse and that it was essential to lift the blockade.

Due to the Israeli and Egyptian border closures and the Israeli sea and air blockade, the population is not free to leave or enter the Gaza Strip, nor is it allowed to freely import or export goods. Sunni Muslims make up the predominant part of the Palestinian population in the Gaza Strip.

Despite the 2005 Israeli disengagement from Gaza, the United Nations, international human rights organisations, and the majority of governments and legal commentators consider the territory to be still occupied by Israel, supported by additional restrictions placed on Gaza by Egypt. Israel maintains direct external control over Gaza and indirect control over life within Gaza: it controls Gaza's air and maritime space, as well as six of Gaza's seven land crossings. It reserves the right to enter Gaza at will with its military and maintains a no-go buffer zone within the Gaza territory. Gaza is dependent on Israel for water, electricity, telecommunications, and other utilities. The system of control imposed by Israel is described as an "indirect occupation".

When Hamas won a majority in the 2006 Palestinian legislative election, the opposing political party, Fatah, refused to join the proposed coalition, until a short-lived unity government agreement was brokered by Saudi Arabia. When this collapsed under pressure from Israel and the United States, the Palestinian Authority instituted a non-Hamas government in the West Bank while Hamas formed a government on its own in Gaza.

Further economic sanctions were imposed by Israel and the European Quartet against Hamas. A brief civil war between the two Palestinian groups had broken out in Gaza when, apparently under a US-backed plan, Fatah contested Hamas's administration. Hamas emerged the victor and expelled Fatah-allied officials and members of the PA's security apparatus from the strip, and has remained the sole governing power in Gaza since that date.

The Gaza Strip has a hot semi-arid climate, with warm winters during which practically all the annual rainfall occurs, and dry, hot summers. Despite the dryness, humidity is high throughout the year. Annual rainfall is higher than in any part of Egypt at around 300 to 400 millimetres (12 to 16 in), but almost all of this falls between November and February. The terrain is flat or rolling, with dunes near the coast. The highest point is Abu 'Awdah (Joz Abu 'Auda), at 105 meters (344 ft) above sea level. Environmental problems include desertification; salination of fresh water; sewage treatment; water-borne diseases; soil degradation; and depletion and contamination of underground water resources.

The topography of the Gaza Strip is dominated by three ridges parallel to the coastline, which consist of Pleistocene-Holocene aged calcareous aeolian (wind deposited) sandstones, locally referred to as "kurkar", intercalated with red-coloured fine grained paleosols, referred to as "hamra". The three ridges are separated by wadis, which are filled with alluvial deposits.

Natural resources of Gaza include arable land—about a third of the strip is irrigated. Recently, natural gas was discovered. The Gaza Strip is largely dependent on water from Wadi Gaza, which also supplies Israel.

Gaza's marine gas reserves extend 32 kilometres from the Gaza Strip's coastline and were calculated at 35 BCM.

In 2010 approximately 1.6 million Palestinians lived in the Gaza Strip, almost 1.0 million of them UN-registered refugees. The majority of the Palestinians descend from refugees who were driven from or left their homes during the 1948 Arab–Israeli War. The Strip's population has continued to increase since that time, one of the main reasons being a total fertility rate which peaked at 8.3 children per woman in 1991 and fell to 4.4 children per woman in 2013 which was still among the highest worldwide. In a ranking by total fertility rate, this places Gaza 34th of 224 regions. The high total fertility rate also leads to the Gaza Strip having an unusually high proportion of children in the population, with 43.5% of the population being 14 or younger and in 2014 the median age was 18, compared to a world average of 28 and 30 in Israel. The only countries with a lower median age are countries in Africa such as Uganda where it was 15.

Sunni Muslims make up the predominant part of the Palestinian population in the Gaza Strip. Most of the inhabitants are Sunni Muslims, with an estimated 2,000 to 3,000 Arab Christians, making the region 99.8 percent Sunni Muslim and 0.2 percent Christian.

The Gaza Museum of Archaeology was established by Jawdat N. Khoudary in 2008. 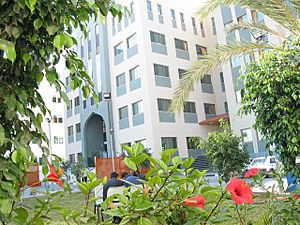 University College of Applied Sciences, the largest college in Gaza

In 2010, Al Zahara, a private school in central Gaza introduced a special program for mental development based on math computations. The program was created in Malaysia in 1993, according to the school principal, Majed al-Bari.

In June 2011, some Gazans, upset that UNRWA did not rebuild their homes that were lost in the Second Intifada, blocked UNRWA from performing its services and shut down UNRWA's summer camps. Gaza residents also closed UNRWA's emergency department, social services office and ration stores.

In 2012, there were five universities in the Gaza Strip and eight new schools were under construction. By 2018, nine universities were open. 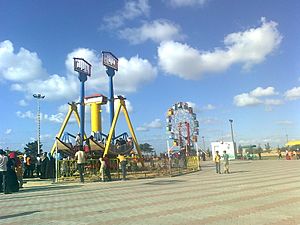 The Gaza Strip has been home to a significant branch of the contemporary Palestinian art movement since the mid 20th century. Notable artists include painters Ismail Ashour, Shafiq Redwan, Bashir Senwar, Majed Shalla, Fayez Sersawi, Abdul Rahman al Muzayan and Ismail Shammout, and media artists Taysir Batniji (who lives in France) and Laila al Shawa (who lives in London). An emerging generation of artists is also active in nonprofit art organizations such as Windows From Gaza and Eltiqa Group, which regularly host exhibitions and events open to the public.

In 2010, Gaza inaugurated its first Olympic-size swimming pool at the As-Sadaka club. The opening ceremony was held by the Islamic Society. The swimming team of as-Sadaka holds several gold and silver medals from Palestinian swimming competitions. 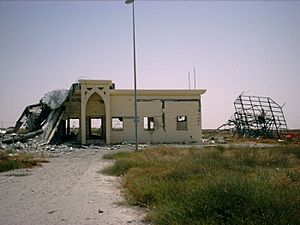 Damaged part of Gaza airport, May 2002

The Oslo Accords ceded control of the airspace and territorial waters to Israel. Any external travel from Gaza requires cooperation from either Egypt or Israel.

Salah al-Din Road (also known as the Salah ad-Deen Highway) is the main highway of the Gaza Strip and extends over 45 km (28 mi), spanning the entire length of the territory from the Rafah Crossing in the south to the Erez Crossing in the north. The road is named after the 12th-century Ayyubid general Salah al-Din.

From 1920 to 1948, the Gaza Strip hosted sections of the Palestine Railways, connecting the region with Egypt.

The Port of Gaza has been an important and active port since antiquity. Despite plans under the Oslo Peace Accords to expand the port, it has been under a blockade since Hamas was elected as a majority party in the 2006 elections. Both the Israeli Navy and Egypt enforce the blockade, which continues currently and has limited many aspects of life in Gaza, especially, according to Human Rights Watch, the movement of people and commerce, with exports being most affected. The improvement and rebuilding of infrastructure is also negatively impacted by these sanctions. Plans to expand the port were halted after the outbreak of the al-Aqsa Intifada.

The Yasser Arafat International Airport opened on 24 November 1998 after the signing of the Oslo II Accord and the Wye River Memorandum. It was closed by Israel in October 2000. Its radar station and control tower were destroyed by Israel Defense Forces aircraft in 2001 during the al-Aqsa Intifada, and bulldozers razed the runway in January 2002. The only remaining runway in the strip, at the Gush Katif Airport, fell into disuse following Israeli disengagement. The airspace over Gaza may be restricted by the Israeli Air Force as the Oslo Accords authorized.

All content from Kiddle encyclopedia articles (including the article images and facts) can be freely used under Attribution-ShareAlike license, unless stated otherwise. Cite this article:
Gaza Strip Facts for Kids. Kiddle Encyclopedia.