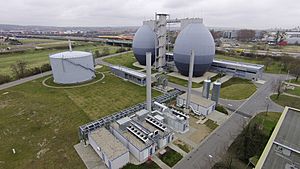 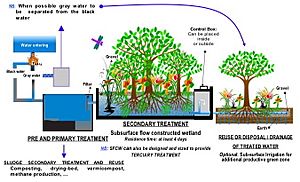 Sewage treatment is the process of dealing with sewage so that is does not cause harm to people or to rivers. Sewage flows in sewers from houses and factories. When it arrives at a sewage treatment works it passes through many stages. Larger works often have more stages than a smaller works.

Large objects are removed using screens. The sewage then flows through a tank so sand can fall out. Large objects and sand might damage machines in later stages.

Fats and solids are removed in the most important stage. Sewage stays in a first tank until solids fall to the bottom. Fat also floats to the top. Fat and solids stay when the water leaves.

Water leaving the most important stage may be cleaned by bacteria and other very small animals and plants in the second important stage. These bacteria use oxygen from the air to eat chemicals from the sewage.

Cleaning bacteria may live in a small pond in simple works with enough land to build a pond. Larger works use machines to help the bacteria find the chemicals. Some works have rocks or pieces of plastic for the bacteria to grow on. Water is pumped over the rocks or plastic.

Other works don't have rocks and plastics for the bacteria to live on. These works blow air through the water to mix it with clumps of bacteria. Some of the bacteria falling to the bottom of the second tank are pumped back to the mixing tank so there are enough bacteria to create a thick brown mixture.

Clean water on the top of the second tank or pond can then flow to a river or the sea but it may also need further treatment to make it cleaner. Some works try to kill bacteria that might make people sick. Some works use chemical poisons to kill these bacteria. Other works use the kind of light that causes a sunburn.

Solids from the first and second tanks can be used to make methane gas and fertiliser for farmers fields.

All content from Kiddle encyclopedia articles (including the article images and facts) can be freely used under Attribution-ShareAlike license, unless stated otherwise. Cite this article:
Sewage treatment Facts for Kids. Kiddle Encyclopedia.