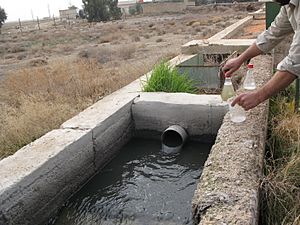 Raw sewage arriving at a sewage treatment plant in Syria

Sewage is the liquid waste produced by us all when using the toilet, having a bath or shower or washing clothes and dishes. In some places it also includes rain-water falling on houses and roads. In big towns and cities it can also have liquid waste from factories in it. It flows in pipes called sewers to be cleaned up at a sewage treatment works.

Sewage is mostly water but it also has many microbes some of which can be harmful. It can have many chemicals in it which can also cause harm to animals and humans.

All content from Kiddle encyclopedia articles (including the article images and facts) can be freely used under Attribution-ShareAlike license, unless stated otherwise. Cite this article:
Sewage Facts for Kids. Kiddle Encyclopedia.