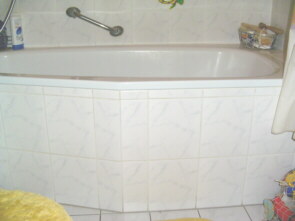 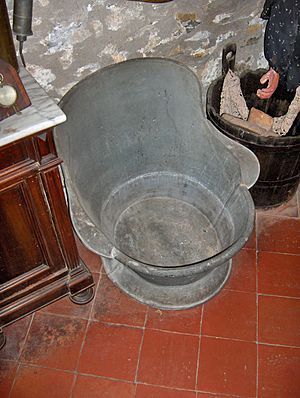 A bath (UK English) or bathtub (US English) is a thing people sit in when washing, to wash their body. The bath is usually in the bathroom. A less common name for a bath is a washtub.

Sometimes people will add scents, oils and salts to the bath for better experience.

A bath is also a place where people can sit in water (or other liquids, often hot) for their health. This is where the town name Bath comes from. 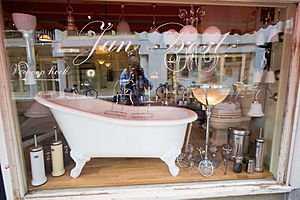 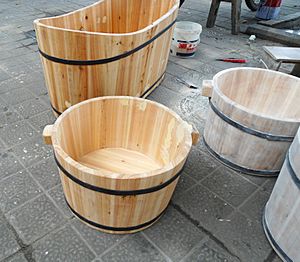 Wooden bathtubs for children and infants in Haikou, Hainan, China 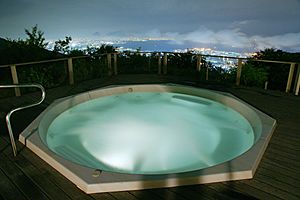 The clawfoot tub or claw-foot tub was considered a luxury item in the late 19th century, originally made from cast iron and lined with porcelain. Modern technology has contributed to a drop in the price of clawfoot tubs, which may now be made of fiberglass, acrylic or other modern materials. Clawfoot tubs usually require more water than a standard bathtub, because generally they are larger. While true antique clawfoot tubs are still considered collectible items, new reproduction clawfoot tubs are chosen by remodellers and new home builders and much like the Western-style bathtubs, clawfoot tubs can also include a variety of shower head options.

Pedestal tubs rest on a pedestal in what many would term an art deco style. Evidence of pedestal tubs dates back to the island of Crete in 1000 BC.

A baby bathtub is one used for bathing infants, especially those not yet old enough to sit up on their own. These can be either a small, stand-alone bath that is filled with water from another source, or a device for supporting the baby that is placed in a standard bathtub. Many are designed to allow the baby to recline while keeping its head out of the water. 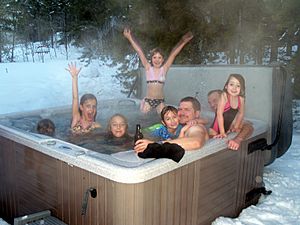 Bathers enjoying a hot tub in the winter in Keystone, Colorado

Hot tubs are common heated pools used for relaxation and sometimes for therapy. Hot tubs became popularized in the U.S. during the early hippie era (1967–1980), appearing in films and music. 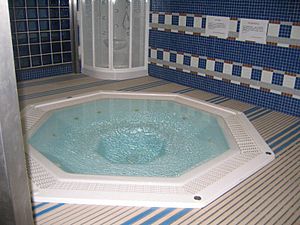 Whirlpool tubs first became popular in the U.S. during the 1960s and 1970s. A spa or hot tub is also called a "Jacuzzi" since the word became a generic after plumbing component manufacturer Jacuzzi introduced the "Spa Whirlpool" in 1968. Air bubbles may be introduced into the nozzles via an air-bleed venturi pump.

Freestanding tubs have become popular in recent years as a result of larger bathrooms being constructed. Freestanding bathtubs may be made from various materials such as stone resin, cast stone, acrylic, cast iron, fiberglass, and porcelain.

Soft tubs are made from soft plastic or foam with a protective non-slip coating. While soft tubs have been available since the 1970s, by the 1990s they were being sold by major manufacturers. The tubs are typically marketed for children and the elderly, to prevent injury from falls.

All content from Kiddle encyclopedia articles (including the article images and facts) can be freely used under Attribution-ShareAlike license, unless stated otherwise. Cite this article:
Bath Facts for Kids. Kiddle Encyclopedia.