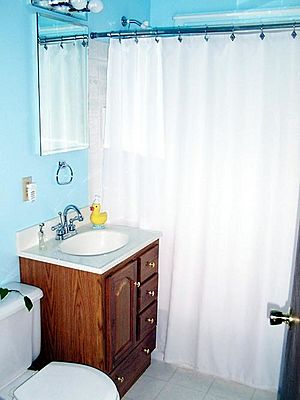 A bathroom (also known as a restroom, washroom, toilet or lavatory) is where people go for personal hygiene activities. This includes use of the toilet, wash their hands, brush their teeth, take a bath, or take a shower. The room may also contain a sink, often called a "wash basin", “hair basin” or "hand basin" (in parts of the United States) and often a "lavatory." In the United States, "bathroom" mostly means "a room containing a lavatory." In other countries this is mostly called the "toilet". The word "bathroom" is also used in the United States for a public toilet or "restroom." Bathrooms also have bathroom cabinets.

Baths go back to 3,000 B.C. Usually, a town would have a special building for people to take baths, which sometimes were part of a religious ceremony. Starting in the 16th century, public baths started declining. People at this time started building baths inside their homes.

Usually, a full bath will have a toilet, a sink, a bathtub, and/or a shower. If a bathroom has only a toilet and a sink, then it is called a half bath or a powder room. A master bath is connected to a master bedroom for the use of whoever lives in that bedroom and no one else.

All content from Kiddle encyclopedia articles (including the article images and facts) can be freely used under Attribution-ShareAlike license, unless stated otherwise. Cite this article:
Bathroom Facts for Kids. Kiddle Encyclopedia.