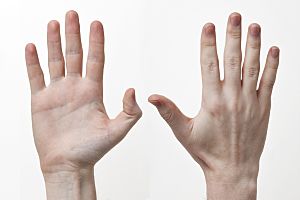 A hand is the part of the body at the end of an arm. Most humans have two hands. Each hand usually has four fingers and a thumb. On the inside of the hand is the palm. When the fingers are all bent tightly, the hand forms a fist. The joints that are the hardest part of the fist are called knuckles. Many other animals, especially other primates, have hands that can hold things. Human hands can do things other hands cannot. 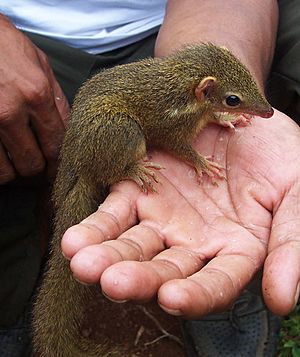 "Hands" of a Javanese tree shrew and a human

The prehensile hands and feet of primates evolved from the mobile hands of semi-arboreal tree shrews that lived about 60 million years ago. This development has been accompanied by important changes in the brain and the relocation of the eyes to the front of the face, together allowing the muscle control and stereoscopic vision necessary for controlled grasping. This grasping, also known as power grip, is supplemented by the precision grip between the thumb and the distal finger pads made possible by the opposable thumbs. Hominidae (great apes including humans) acquired an erect bipedal posture about 3.6 million years ago, which freed the hands from the task of locomotion and paved the way for the precision and range of motion in human hands. Functional analyses of the features unique to the hand of modern humans have shown that they are consistent with the stresses and requirements associated with the effective use of paleolithic stone tools. It is possible that the refinement of the bipedal posture in the earliest hominids evolved to facilitate the use of the trunk as leverage in accelerating the hand.

While the human hand has unique anatomical features, including a longer thumb and fingers that can be controlled individually to a higher degree, the hands of other primates are anatomically similar and the dexterity of the human hand can not be explained solely on anatomical factors. The neural machinery underlying hand movements is a major contributing factor; primates have evolved direct connections between neurons in cortical motor areas and spinal motoneurons, giving the cerebral cortex monosynaptic control over the motoneurons of the hand muscles; placing the hands "closer" to the brain. The recent evolution of the human hand is thus a direct result of the development of the central nervous system, and the hand, therefore, is a direct tool of our consciousness — the main source of differentiated tactile sensations — and a precise working organ enabling gestures — the expressions of our personalities.

There are nevertheless several primitive features left in the human hand, including pentadactyly (having five fingers), the hairless skin of the palm and fingers, and the os centrale found in human embryos, prosimians, and apes. Furthermore, the precursors of the intrinsic muscles of the hand are present in the earliest fishes, reflecting that the hand evolved from the pectoral fin and thus is much older than the arm in evolutionary terms.

The proportions of the human hand are plesiomorphic (shared by both ancestors and extant primate species); the elongated thumbs and short hands more closely resemble the hand proportions of Miocene apes than those of extant primates. Humans did not evolve from knuckle-walking apes, and chimpanzees and gorillas independently acquired elongated metacarpals as part of their adaptation to their modes of locomotion. Several of primitive hand features most likely present in the chimpanzee-human last common ancestor (CHLCA) and absent in modern humans are still present in the hands of Australopithecus, Paranthropus, and Homo floresiensis. This suggests that the derived changes in modern humans and Neanderthals did not evolve until 2.5 to 1.5 million years ago or after the appearance of the earliest Acheulian stone tools, and that these changes are associated with tool-related tasks beyond those observed in other hominins. The thumbs of Ardipithecus ramidus, an early hominin, are almost as robust as in humans, so this may be a primitive trait, while the palms of other extant higher primates are elongated to the extent that some of the thumb's original function has been lost (most notably in highly arboreal primates such as the spider monkey). In humans, the big toe is thus more derived than the thumb.

All content from Kiddle encyclopedia articles (including the article images and facts) can be freely used under Attribution-ShareAlike license, unless stated otherwise. Cite this article:
Hand Facts for Kids. Kiddle Encyclopedia.