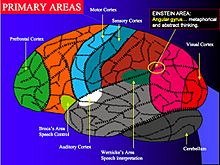 Different parts of the cortex
have different functions

Though this cannot be seen directly, different parts of the cortex have different functions (see diagram). It plays a key role in memory, attention, perceptual awareness, thought, language, and consciousness.

It is a sheet of neural tissue that is outermost to the cerebrum of the mammalian brain. It has up to six layers of nerve cells. The human cerebral cortex is 2–4 mm (0.08–0.16 inches) thick.

In preserved brains, it is grey, so it is often called 'grey matter'. In contrast to gray matter that is formed from neurons and their unmyelinated fibers, the white matter below them is formed predominantly by myelinated axons interconnecting neurons in different regions of the cerebral cortex with each other and neurons in other parts of the central nervous system.

The surface of the cerebral cortex is folded in large mammals, such that more than two-thirds of it in the human brain is buried in the grooves.

Other parts of the cerebral cortex are:

The cellular organization of the old cortex is different from the six-layer structure mentioned above.

All content from Kiddle encyclopedia articles (including the article images and facts) can be freely used under Attribution-ShareAlike license, unless stated otherwise. Cite this article:
Cerebral cortex Facts for Kids. Kiddle Encyclopedia.