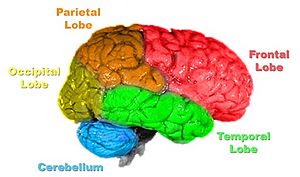 Anatomy of the human brain 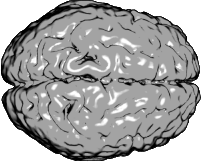 Surface rendering of the human brain, viewed from above. The image shows the cerebral hemispheres. The front of the brain is to the right of the image. Created using Blender, based on MRI data (Wellcome Department of Imaging Neuroscience).

The cerebrum takes in data from sight and other sense organs, and 'makes sense' of it (interprets it). It controls consciousness and action (voluntary muscular activity). It plans, thinks, judges, and organises speech and information. These are the so-called 'higher mental functions'.

The cerebrum is divided into two cerebral hemispheres. These two cerebral hemispheres are connected by three bands of nerve fibres, or commissures, which connect the two halves. The outer layers of the cerebrum are made up of the grey matter, and is called the cerebral cortex. The inner layers are made up of the white matter (nerve fibres), and the basal ganglia.

In the cerebrum, there are specific regions for each kind of stimulus and its response. For example, occipital lobe is the region for visual reception, temporal lobe for auditory reception, and parietal lobe for touch, smell, temperature and conscious association. The frontal lobe takes action, based on sensory input and other factors.

All content from Kiddle encyclopedia articles (including the article images and facts) can be freely used under Attribution-ShareAlike license, unless stated otherwise. Cite this article:
Cerebrum Facts for Kids. Kiddle Encyclopedia.