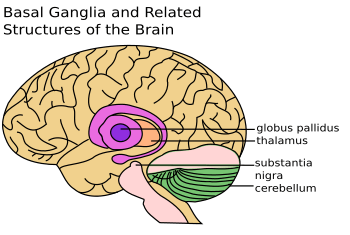 Position of the basal ganglia

The basal ganglia (or basal nuclei) are three areas under the cerebral cortex. They are part of the cerebrum (forebrain), and connected to the midbrain and the thalamus. They are vital to movement, and damage here results in damaged ability to move.

The three areas are:

The range of behaviours controlled by the nuclei is wide. They control eye movements. They do voluntary motor control, learning procedures for routine behaviors or "habits", and cognitive emotional functions.

The basal ganglia also control motivation. They select actions, that is, the choice of what to do at a given time. Experimental studies show that the basal ganglia inhibit (suppress) a number of motor systems. A release of this inhibition lets a motor system act. This "behaviour switching" is influenced by signals from many parts of the brain, including the prefrontal cortex, which plays a key role in doing things.

The basal ganglia form one of the basic components of the forebrain, and can be recognized in all species of vertebrates. Even in the lamprey (one of the most primitive vertebrates) striatal, pallidal, and nigral elements can be identified by their anatomy and histochemistry.

All content from Kiddle encyclopedia articles (including the article images and facts) can be freely used under Attribution-ShareAlike license, unless stated otherwise. Cite this article:
Basal ganglia Facts for Kids. Kiddle Encyclopedia.