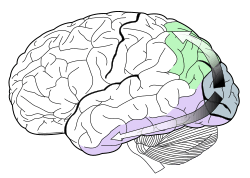 The dorsal stream (green) and ventral stream (purple) are shown. They come from from primary visual cortex

David Hubel and Torsten Wiesel did research on the visual cortex for many years. They won the 1981 Nobel Prize in Physiology or Medicine for their discoveries about information processing in the visual system.

Research on the primary visual cortex can involve recording action potentials from electrodes within the brain of cats, ferrets, rats, mice, or monkeys. Alternatively, signals can be recorded outside the animal by EEG, MEG, or fMRI. These techniques gather information without invading the brain.

Each V1 sends information to two primary pathways, called the ventral stream and the dorsal stream.

All content from Kiddle encyclopedia articles (including the article images and facts) can be freely used under Attribution-ShareAlike license, unless stated otherwise. Cite this article:
Visual cortex Facts for Kids. Kiddle Encyclopedia.