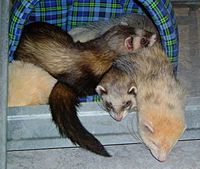 Ferrets (Mustela putorius furo) are domestic animals. They are the domestic form of the European polecat. They are in the weasel genus of the family Mustelidae.

With their long thin body, ferrets look like a large weasel. They may have different colours and markings on their fur. A lot of ferrets in one place will sometimes have a strange smell. This is caused by natural oils produced by the ferrets. 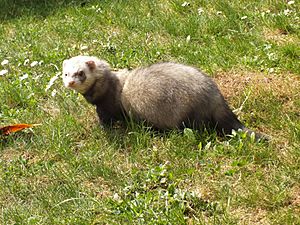 With their long thin body, ferrets look like a large weasel. They may have different colours and markings on their fur. A lot of ferrets in one place will sometimes have a strange scent. This is caused by natural oils produced by the ferrets.

As naturally crepuscular animals, ferrets tend to sleep during the day. This deters many people from getting them although most ferret owners say their ferrets change their sleeping schedules to that of their owners. 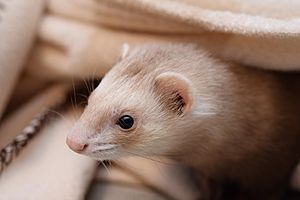 Domesticated ferrets are used for hunting, or can be kept as pets. Hunting with ferrets is called ferreting. Because of their thin body, they can go down into holes and hunt rodents and rabbits. Ferrets have been kept as pets since the Middle Ages. 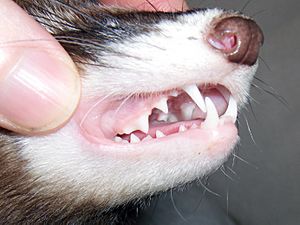 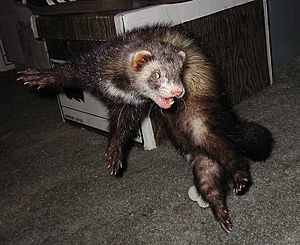 A ferret in a war dance jump.

Ferrets are very flexible and can fit into small holes to flush out rabbits or rodents. Ferrets can get through open vents or small holes in walls. Ferrets are good climbers so if curtains are touching the floor they can easily climb the curtains.

Ferrets should be kept in a group, unless you can provide them with multiple hours of activity, they get quite bored when alone. Ferrets tend to sleep curled up together in a ball usually making them indistinguishable from one another.

Ferrets are carnivores and cannot tolerate grains or vegetable matter well. Their diet should consist of around 20% fat and 80% meat. Ferrets need a high calorie diet: commercial dog and cat foods do not contain enough fats and protein to suit them. Feeding them such a diet while convenient will ultimately shorten the ferrets life.

Fresh chicken, turkey or even duck is a good choice for your ferret. Commercial ferret foods are available but many contain grains and also fruits and as such are not suitable for them. Research brand ingredients or find a recipe to make your own. 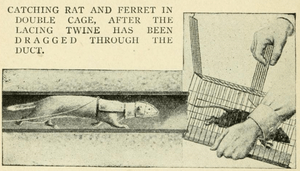 Muzzled ferret flushing a rat, as illustrated in Harding's Ferret Facts and Fancies (1915)

For millennia, the main use of ferrets was for hunting, or "ferreting". With their long, lean build, and inquisitive nature, ferrets are very well equipped for getting down holes and chasing rodents, rabbits and moles out of their burrows.

Caesar Augustus sent ferrets or mongooses to the Balearic Islands to control the rabbit plagues in 6 BC.

Ferrets were first introduced into the New World in the 17th century, and were used extensively from 1860 until the start of World War II to protect grain stores in the American West from rodents.

They are still used for hunting in some countries, including the United Kingdom, where rabbits are considered a plague species by farmers. The practice is illegal in several countries where it is feared that ferrets could unbalance the ecology.

In 2009 in Finland, where ferreting was previously unknown, the city of Helsinki began to use ferrets to restrict the city's rabbit population to a manageable level. Ferreting was chosen because in populated areas it is considered to be safer and less ecologically damaging than shooting the rabbits.

All content from Kiddle encyclopedia articles (including the article images and facts) can be freely used under Attribution-ShareAlike license, unless stated otherwise. Cite this article:
Ferret Facts for Kids. Kiddle Encyclopedia.