Kids Encyclopedia Facts
For the band, see The Monkees.

Monkeys are tree-dwelling (arboreal) mammals. They are in the primate order. Monkeys are intelligent, social animals. Most monkeys have a tail, even if it is a short one.

The word "monkey" is not a scientific term. It is used for two rather different groups of primates. The big distinction is between Old World monkeys and New World monkeys.

Both these groups are in the infraorder Simiiformes. That infraorder also includes the great apes and man.

Some monkeys live almost entirely in trees. Others live partly on the ground. Monkeys are mainly vegetarian, with a strong preference for fruit. However, they may eat a wide range of other food, including insects. Monkeys can live in forests and savannahs. Monkeys do not live in deserts. Some can live in snowy mountains, but more live in rainforests. There are none in the rainforests of Australia and New Guinea, and apparently they never reached those islands.

The smallest known monkey is the pygmy marmoset. It is about 14-16cm in size (without the tail). It weighs about 120 grams. It lives in the treetops of rainforests in Brazil, Colombia and Ecuador. The largest known monkey is the mandrill. It can grow to about 1 m in size. Adults weigh up to 35 kg. The monkeys often climb with the help of their tails.

The word monkey might have come from a popular German story, "Roman de Renart" (Reynard the Fox). In there, the name of the son of Martin the Ape is Moneke.

In Africa, monkeys can be sold as "bushmeat" (meat of wild animals). Monkey brains are eaten in some parts of Africa, South Asia, and China.

The many species of monkey have varied relationships with humans. Some are kept as pets, others used as model organisms in laboratories or in space missions. They may be killed in monkey drives (when they threaten agriculture) or used as service animals for the disabled.

In some areas, some species of monkey are considered agricultural pests, and can cause extensive damage to commercial and subsistence crops. This can have important implications for the conservation of endangered species, which may be subject to persecution. In some instances farmers' perceptions of the damage may exceed the actual damage. Monkeys that have become habituated to human presence in tourist locations may also be considered pests, attacking tourists.

In religion and popular culture, monkeys are a symbol of playfulness, mischief and fun.

As service animals for the disabled

Some organizations train capuchin monkeys as service animals to assist quadriplegics and other people with severe spinal cord injuries or mobility impairments. After being socialized in a human home as infants, the monkeys undergo extensive training before being placed with a disabled person. Around the house, the monkeys assist with feeding, fetching, manipulating objects, and personal care. 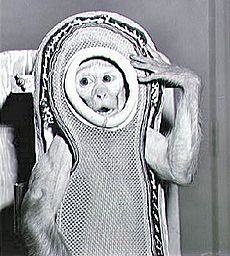 A number of countries have used monkeys as part of their space exploration programmes, including the United States and France. The first monkey in space was Albert II, who flew in the US-launched V-2 rocket on June 14, 1949. 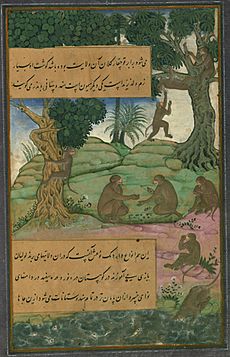 Sun Wukong (the "Monkey King"), a character who figures prominently in Chinese mythology, is the protagonist in the classic comic Chinese novel Journey to the West.

Monkeys are prevalent in numerous books, television programs, and movies. The television series Monkey and the literary characters Monsieur Eek and Curious George are all examples.

Informally, the term "monkey" is often used more broadly than in scientific use and may be used to refer to apes, particularly chimpanzees, gibbons, and gorillas. Author Terry Pratchett alludes to this difference in usage in his Discworld novels, in which the Librarian of the Unseen University is an orangutan who gets very violent if referred to as a monkey. Another example is the use of Simians in Chinese poetry.

The winged monkeys are prominent characters in The Wizard of Oz. 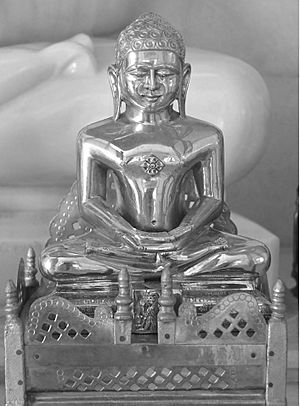 Abhinandananatha with his symbol of monkey below his idol 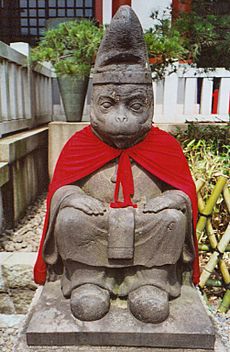 Simian statue at a Buddhist shrine in Tokyo, Japan 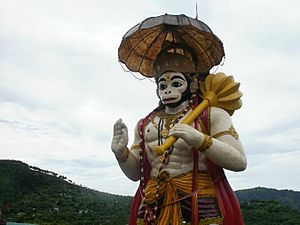 A statue of Hanuman

Monkey is the symbol of fourth Tirthankara in Jainism, Abhinandananatha.

Hanuman, a prominent deity in Hinduism, is a human-like monkey god who is believed to bestow courage, strength and longevity to the person who thinks about him or Rama.

In Buddhism, the monkey is an early incarnation of Buddha but may also represent trickery and ugliness. The Chinese Buddhist "mind monkey" metaphor refers to the unsettled, restless state of human mind. Monkey is also one of the Three Senseless Creatures, symbolizing greed, with the tiger representing anger and the deer lovesickness.

The Sanzaru, or three wise monkeys, are revered in Japanese folklore; together they embody the proverbial principle to "see no evil, hear no evil, speak no evil".

The Moche people of ancient Peru worshipped nature. They placed emphasis on animals and often depicted monkeys in their art.

The Tzeltal people of Mexico worshipped monkeys as incarnations of their dead ancestors.

All content from Kiddle encyclopedia articles (including the article images and facts) can be freely used under Attribution-ShareAlike license, unless stated otherwise. Cite this article:
Monkey Facts for Kids. Kiddle Encyclopedia.