Howler monkeys, genus Alouatta, are one of the largest New World monkeys. There are 15 species. They are native to South and Central American forests.

These monkeys are famous for their loud howls, which can travel three miles (4.8 km) through dense forest. They are the loudest monkey and may be the loudest land animal. Group males call at dawn and dusk, and at times during the day. The function of howling may relate to intergroup spacing and territory protection.

These social primates live high in the trees (the canopy) of the rain forests of Central America, Venezuela, Colombia, Ecuador, Guyana, Brazil, northern Argentina, and Bolivia. Howlers have a life span of about 20 years. They are in decline due to a loss of habitat. 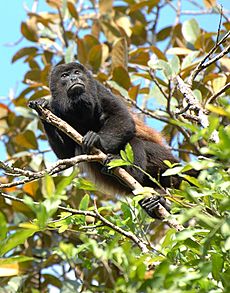 Howler monkeys have short snouts and wide-set, round nostrils. Their noses are very keen, and they can smell out food (primarily fruit and nuts) up to 2 km away. Their noses are usually roundish snout-type, and the nostrils have many sensory hairs growing from the interior. They range in size from 56 to 92 cm (22 to 36 in), excluding their tails, which can be equally as long, in fact in some cases the tail has been found to be almost five times the body length. This is a prime characteristic. Like many New World monkeys, they have prehensile tails, which they use for picking fruit and nuts from trees. Unlike other New World monkeys, both male and female howler monkeys have trichromatic color vision. This has evolved independently from other New World monkeys due to gene duplication. They have lifespans of 15 to 20 years. Howler species are dimorphic and can also be dichromatic (i.e. Alouatta caraya). Males are, on average, 1.5 to 2.0 kg heavier than females.

The hyoid of Alouatta is pneumatized, one of the few cases of postcranial pneumaticity outside the Saurischia. The volume of the hyoid of male howler monkeys is negatively correlated with the dimensions of their testes.

Howler monkeys generally move quadrupedally on the tops of branches, usually grasping a branch with at least two hands or one hand and the tail at all times. Their strong prehensile tails are able to support their entire body weight. Fully grown adult howler monkeys do not often rely on their tails for full body support, whereas juveniles do so more frequently. 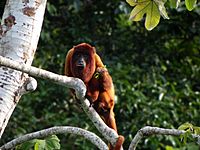 Most howler species live in groups of six to 15 animals, with one to three adult males and multiple females. Mantled howler monkeys are an exception, commonly living in groups of 15 to 20 individuals with more than three adult males. Unlike most New World monkeys, in which one sex remains in natal groups, juveniles of both sexes emigrate from their natal groups, such that howler monkeys could spend the majority of their adult lives in association with unrelated monkeys.

Physical fighting among group members is infrequent and generally of short duration. However, serious injuries can result. Both males and females rarely fight with each other, but physical aggression is even more rare between sexes. Group size varies by species and by location, with an approximate ratio of one male to four females. 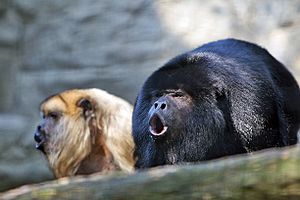 As their name suggests, vocal communication forms an important part of their social behavior. They each have an enlarged basihyal or hyoid bone, which helps them make their loud vocalizations. Group males generally call at dawn and dusk, as well as interspersed times throughout the day. The main vocals consist of loud, deep guttural growls or "howls". Howler monkeys are widely considered to be the loudest land animal. According to Guinness Book of World Records, their vocalizations can be heard clearly for 3 mi (4.8 km). The function of howling is thought to relate to intergroup spacing and territory protection, as well as possibly to mate-guarding. 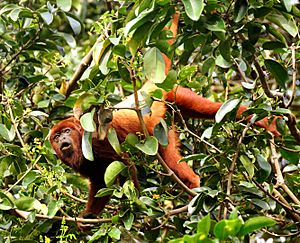 These large and slow-moving monkeys are the only folivores of the New World monkeys. Howlers eat mainly top canopy leaves, together with fruit, buds, flowers, and nuts. They need to be careful not to eat too many leaves of certain species in one sitting, as some contain toxins that can poison them. Howler monkeys are also known to occasionally raid birds' nests and chicken coops and consume the eggs.

While seldom aggressive, howler monkeys do not take well to captivity and are of surly disposition. However, the black howler (Alouatta caraya) is a relatively common pet monkey in contemporary Argentina due to its gentle nature, in comparison to the capuchin monkey's aggressive tendencies, in spite of its lesser intelligence, as well as the liabilities meant by the size of its droppings and the males' loud vocalisations.

All content from Kiddle encyclopedia articles (including the article images and facts) can be freely used under Attribution-ShareAlike license, unless stated otherwise. Cite this article:
Howler monkey Facts for Kids. Kiddle Encyclopedia.