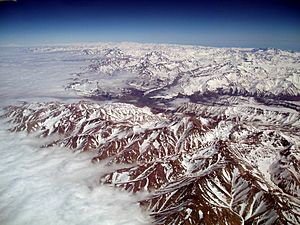 South America is the continent to the south of North America. These two continents are separated by the Panama Canal.

South America is attached to Central America at the boundary of Panama. Geographically all of Panama – including the part east of the Panama Canal in the isthmus – is usually included in North America alone, among the countries of Central America.

The majority of South America has a tropical climate. It is humid tropical and tropical savanna in the north. It is humid subtropical in the southeast. Rainfall is different depending on the place. The Atacama Desert is one of the driest places in the world. The Amazon basin is very rainy; the average rainfall is 2,000 millimetres (79 in). The Brazilian plateau receives rainfall between 1000 and 2000 mm. Temperatures can also be very difficult to read. The usual temperature in the mountains is 15 °C (59 °F) degrees, while temperatures in the Tropics can be more than 38 °C (100 °F) degrees.

The soil in Argentina's Pampas is among the best in the world. Brazil's soil is very good for growing coffee. A great number of minerals have been found. Few, however, have been mined. Among those that were mined are iron, manganese, gold, and gemstones. The tropical forests are rich in valuable trees, like mahogany, ebony, and rubber. Oil is also a resource in some places.

South America is home to a large variety of animal life. These include animals such as jaguars, macaws, monkeys, anacondas, llamas, piranhas, toucans, tapirs, cougars, condors and chinchillas.

The most popular attractions are:

All content from Kiddle encyclopedia articles (including the article images and facts) can be freely used under Attribution-ShareAlike license, unless stated otherwise. Cite this article:
South America Facts for Kids. Kiddle Encyclopedia.