Pernambuco is a state of Brazil. The capital city of the state is Recife. About 8 million people live in Pernambuco with 1.5 million of those living in Recife. The economy is largely based on agriculture, its main exports are sugar cane and manioc. It has a mainly tropical climate. 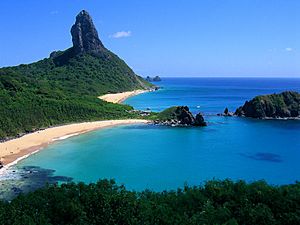 Pernambuco comprises a comparatively narrow coastal zone, a high inland plateau, and an intermediate zone formed by the terraces and slopes between the two.

Its surface is much broken by the remains of the ancient plateau which has been worn down by erosion, leaving escarpments and ranges of flat-topped mountains, called chapadas, capped in places by horizontal layers of sandstone. Ranges of these chapadas form the boundary lines with three states–the Serra dos Irmãos and Serra Vermelha with Piauí, the Serra do Araripe with Ceará, and the Serra dos Cariris Velhos with Paraíba. 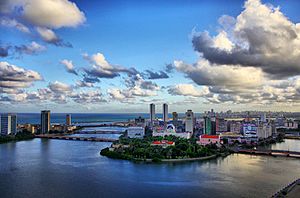 The coastal area is fertile, and was formerly covered by the humid Pernambuco coastal forests, the northern extension of the Atlantic Forests (Mata Atlântica) of eastern Brazil. It is now placed to extensive sugar cane plantations. It has a hot, humid climate, relieved to some extent by the south-east trade winds. 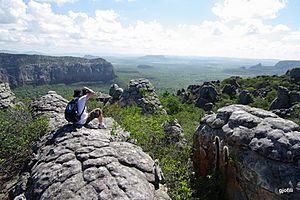 The middle zone, called the agreste region, has a drier climate and lighter vegetation, including the semi-deciduous Pernambuco interior forests, where many trees lose their leaves in the dry season.

The inland region, called the sertão is high, stony, and dry, and frequently devastated by prolonged droughts (secas). The climate is characterized by hot days and cool nights. There are two clearly defined seasons, a rainy season from March to June, and a dry season for the remaining months. The interior of the state is covered mostly by the dry thorny scrub vegetation called caatinga. The Rio São Francisco is the main water source for this area. 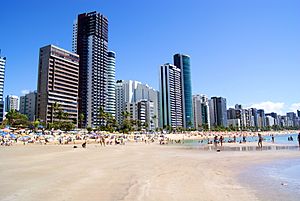 The climate is more mild in the countryside of the state because of the Borborema Plateau ("Planalto da Borborema", popularly known as "Serra das Russas" or "Russians' Mountain"). Some towns are located more than 1000 meters above sea level, and temperatures there can descend to 10 °C (50 °F) and even 5 °C (41 °F) in some cities (i.e., Triunfo) during the winter.

The island of Fernando de Noronha in the Atlantic Ocean, 535 km northeast of Recife, has been part of Pernambuco since 1988.

The rivers of the state include a number of small plateau streams flowing southward to the São Francisco River, and several large streams in the eastern part flowing eastward to the Atlantic. The former are the Moxotó, Ema, Pajeú, Terra Nova, Brigida, Boa Vista and Pontai, and are dry channels the greater part of the year.

The largest of the coastal rivers are the Goiana River, which is formed by the confluence of the Tracunhaem and Capibaribe-mirim, and drains a rich agricultural region in the north-east part of the state; the Capibaribe, which has its source in the Serra de Jacarara and flows eastward to the Atlantic at Recife with a course of nearly 300 miles (480 km); the Ipojuca, which rises in the Serra de Aldeia Velha and reaches the coast south of Recife; the Serinhaen; and the Uná. A large tributary of the Uná, the Rio Jacuhipe, forms part of the boundary line with Alagoas. 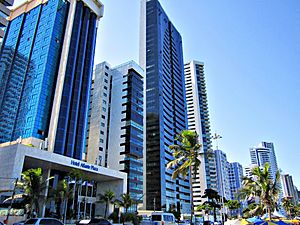 The four-day period before Lent leading up to Ash Wednesday is carnival time in Brazil. Rich and poor alike forget their cares as they party in the streets. Pernambuco has large Carnaval celebrations, including the frevo, typical Pernambuco music. Another famous carnaval music style from Pernambuco is maracatu.

The cities of Recife and Olinda hold the most authentic and democratic carnaval celebrations in Brazil. The largest carnaval parade in all of Brazil is Galo da Madrugada, which takes place in downtown Recife in the Saturday of carnaval. Another famous event is the Noite dos Tambores Silenciosos.

Recife's joyous Carnaval is nationally known, attracting thousands of people every year. The party starts a week before the official date, with electric trios “shaking” the Boa Viagem district.

On Friday, people take to the streets to enjoy themselves to the sound of frevo and to dance with maracatu, ciranda, caboclinhos, afoxé, reggae and manguebeat (cultural movement created in Recife during the 1990s) groups. There are still many other entertainment centres around the city, featuring local and national artists. 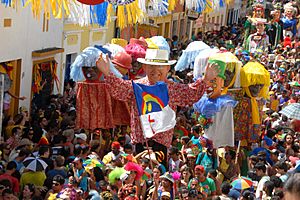 One of the highlights is Saturday when more than one million people follow the Galo da Madrugada group. From Sunday to Monday, there is the Night of the Silent Drums, on the Pátio do Terço, where Maracatus honor slaves that died in prisons.

Festa Junina was introduced to Northeastern Brazil by the Portuguese, for whom Saint John's day (also celebrated as Midsummer Day in several European countries), on 24 June, is one of the oldest and most popular celebrations of the year. Differently, of course, from what happens on the European Midsummer Day, the festivities in Brazil do not take place during the summer solstice, but during the tropical winter solstice. The festivities traditionally begin after the 12 June, on the eve of Saint Anthony's day, and last until the 29th, which is Saint Peter's day. During these fifteen days, there are bonfires, fireworks, and folk dancing in the streets. Once exclusively a rural festival, today, in Brazil, it is largely a city festival during which people joyfully and theatrically mimic peasant stereotypes and clichés in a spirit of jokes and good times. Typical refreshments and dishes are served, including canjica and pamonha. Like during Carnival, these festivities involve costume-wearing (in this case, peasant costumes), dancing, heavy drinking, and visual spectacles (fireworks display and folk dancing). Like what happens on Midsummer and Saint John's Day in Europe, bonfires are a central part of these festivities in Brazil.

Saint John's Day is celebrated throughout Pernambuco. Nonetheless, the festivities in Caruaru are by far the largest in the state. Saint John's festivals in Gravatá and Carpina are also very popular.

In the hilly areas of the interior – mainly in areas with a micro-climate of altitude – temperatures that can reach 8 °C in the winter. Every winter, when the weather is milder, tourists from neighboring states and other parts of Pernambuco visit cities such as Garanhuns, Gravatá, Triunfo Taquaritinga do Norte and Brejo da Madre de Deus.

The city of Garanhuns holds an annual Winter Festival, in the month of July. The main attractions are concerts, dances, rural tourism, culinary and the relatively low temperatures for a tropical climate.

All content from Kiddle encyclopedia articles (including the article images and facts) can be freely used under Attribution-ShareAlike license, unless stated otherwise. Cite this article:
Pernambuco Facts for Kids. Kiddle Encyclopedia.