The spinner dolphin (Stenella longirostris) is a small dolphin found in off-shore tropical waters around the world. It is famous for its acrobatic displays in which it spins along its longitudinal axis as it leaps through the air. It is a member of the family Delphinidae of toothed whales.

The spinner dolphin is sometimes referred to as the long-snouted dolphin, particularly in older texts, to distinguish it from the similar Clymene dolphin, which is often called the short-snouted spinner dolphin. The species was described by John Gray in 1828. The four named subspecies are:

The species, though, displays greater variety than these subspecies might indicate. A hybrid form characterized by its white belly inhabits the eastern Pacific. Other less distinct groupings inhabit other oceans.

The species name comes from the Latin term for long-beaked. 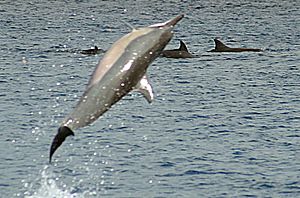 Spinner dolphins are small cetaceans with a slim build. Adults are typically 129–235 cm long and reach a body mass of 23–79 kg. This species has an elongated rostrum and a triangular or subtriangular dorsal fin. Spinner dolphins generally have tripartite color patterns. The dorsal area is dark gray, the sides light gray, and the underside pale gray or white. Also, a dark band runs from the eye to the flipper, bordered above by a thin, light line. However, the spinner dolphin has more geographic variation in form and coloration than other cetaceans. In the open waters of eastern Pacific, dolphins have relatively small skulls with short rostra. A dwarf form of spinner dolphin occurs around southeast Asia. In these same subspecies, a dark dorsal cape dims their tripartite color patterns. Further offshore, subspecies tend to have a paler and less far-reaching cape. In certain subspecies, some males may have upright fins that slant forward. Some populations of spinner dolphin found in the eastern Pacific have bizarre backwards-facing dorsal fins, and males can have strange humps and upturned caudal flukes.

The spinner dolphin lives in nearly all tropical and subtropical waters between 40°N and 40°S. The species primarily inhabits coastal waters, islands, or banks. However, in the eastern tropical Pacific, spinner dolphins live far from shore. Spinner dolphins may use different habitats depending on the season.

The spinner dolphin feeds mainly on small mesopelagic fish, squids, and sergestid shrimps, and will dive 200–300 m to feed on them. Spinner dolphins of Hawaii are nocturnal feeders and forage in deep scattering layers, which contain many species. The dwarf spinner dolphin may feed mostly on benthic fish in reefs and shallow water. Off Oahu, Hawaii, spinner dolphins forage at night and cooperatively herd their prey into highly dense patches. They swim around the prey in a circle and a pair may swim through the circle to make a catch. Spinner dolphins are in turn preyed on by sharks. Other possible predators include the killer whale, the false killer whale, the pygmy killer whale and the short-finned pilot whale. They are susceptible to parasites, and are known to exhibit both external ones like barnacles and remoras, and internal ones, like nematodes, trematodes, cestodes and acanthocephalans. 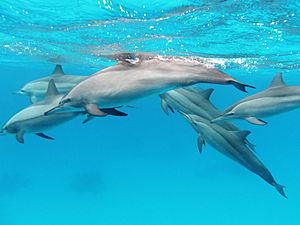 A pod of spinner dolphins in the Red Sea

In certain regions, such as Hawaii and northern Brazil, dolphins spend the daytime resting in shallow bays near deep water. At dusk, they travel offshore to feed. They travel along the shore during foraging trips, and the individuals that occupy the same bay may change daily. Some individual dolphins do not always go to a bay to rest; however, in Hawaii, dolphins do seem to return to the same site each trip. Spinner dolphins live in an open and loose social organization. The spinner dolphins of Hawaii live in family groups, but also have associations with others beyond their groups. Mothers and calves form strong social bonds. Spinner dolphins change partners for up to some weeks. A dozen adult males may gather into coalitions. Vocalizations of spinner dolphins include whistles, which may be used to organize the school, burst-pulse signals, and echolocation clicks. The spinner dolphin has a 10-month gestation period, and mothers nurse their young for one to two years. Females are sexually mature at four to seven years, with three-year calving intervals, while males are sexually mature at seven to 10 years. Breeding is seasonal, more so in certain regions than others.

Spinner dolphins are known for their acrobatics and aerial behaviors. A spinner dolphin comes out of the water front first and twists its body as it rises into the air. When it reaches its maximum height, the dolphin descends back into the water, landing on its side. A dolphin can make two to 5.5 spins in one leap; the swimming and rotational speed of the dolphin as it spins underwater affects the number of spins it can do while airborne. These spins may serve several functions. Dolphins may also make nose-outs, tail slaps, flips, head slaps, "salmon leaps", and side and back slaps.

Tens of thousands of spinner dolphins, mostly eastern and white-bellied varieties, were killed in the 30 years after purse seine fishing for tuna began in the 1950s. The process killed probably half of all eastern spinner dolphins. They have also been contaminated by pollutants such as DDT and PCBs. Spinner dolphins, as with other species affected by ETP tuna purse-seine fishing, are managed nationally by the coastal countries and internationally by the IATTC. The IATTC has imposed annual stock mortality limits on each purse seine and promulgated regulations regarding the safe release of dolphins.

The eastern tropical Pacific and Southeast Asian populations of the spinner dolphin are listed on Appendix II of the Convention on the Conservation of Migratory Species of Wild Animals (CMS), since they have an unfavourable conservation status or would benefit significantly from international co-operation organized by tailored agreements.

Spinner dolphins in Hawaii receive multiple daily visits to their near-shore resting grounds, with boats taking people out daily to snorkel and interact with the local dolphin population. Such activities are increasingly coming under criticism on the grounds of possible harm to the dolphins, and efforts are being made both to educate the public in order to minimise human impact on the dolphins, and to bring in regulations to govern these activities.

All content from Kiddle encyclopedia articles (including the article images and facts) can be freely used under Attribution-ShareAlike license, unless stated otherwise. Cite this article:
Spinner dolphin Facts for Kids. Kiddle Encyclopedia.