Midway is the only island in the Hawaiian archipelago that is not part of the state of Hawaii.

The Midway Atoll National Wildlife Refuge, encompassing 590,991.50 acres (239,165.77 ha) of land and water in the surrounding area, is administered by the United States Fish and Wildlife Service (FWS). The refuge and most of its surrounding area are part of the larger Papahānaumokuākea Marine National Monument.

From 1941 until 1993, the atoll was the home of the Naval Air Facility Midway Island, which played a crucial role in The Battle of Midway, fought from June 4 until June 6, 1942. Aircraft based at the then-named Henderson Field on Eastern Island joined with United States Navy ships and planes in an attack on a Japanese battle group that sunk four carriers, one heavy cruiser and defended the atoll from invasion. The battle was a critical Allied victory and major turning point of the Pacific campaign of World War II.

Approximately 100 to 200 people live on the atoll, which includes staff of the U.S. Fish and Wildlife Service and contract workers.

The economy is derived solely from governmental sources and tourist fees. Nearly all supplies must be brought to the island by ship or plane, though a hydroponic greenhouse and garden supply some fresh fruits and vegetables. 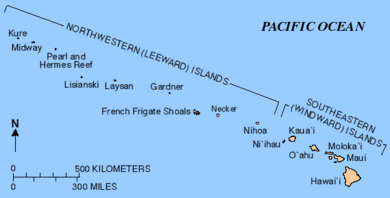 As its name suggests, Midway is roughly equidistant between North America and Asia, and lies almost halfway around the world longitudinally from Greenwich, UK. It is near the northwestern end of the Hawaiian archipelago, about one-third of the way from Honolulu, Hawaii, to Tokyo, Japan. 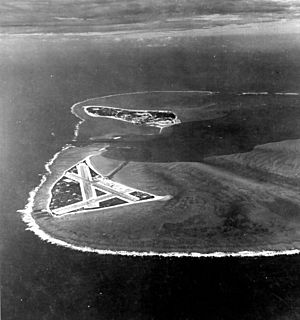 Midway Atoll is what remains of a large shield volcano that, 28 million years ago, may have been as large as Lana`i. What remains now is a shallow water atoll about 10 kilometers across. As the Pacific Ocean washed away the top of the volcano, coral reefs grew. These coral reefs are now over 400 m thick. The two significant islands, Sand Island and East Island, and several migrating sandbars rise above the ocean surface. They provide habitat for hundreds of thousands of birds. Midway was discovered in 1859 by N.C. Brooks, captain of the sealing ship Gambia. By claiming Midway for the United States under the Guano Act of 1856, Midway became the only island in the entire Hawaiian archipelago that was not part of the State of Hawai`i. Midway is the most frequently visited locale in the Northwestern Hawaiian Islands (NWHI). It lies nearly halfway between North America and Asia. It also lies almost halfway around the earth from Greenwich, England.

The islands of Midway Atoll have been extensively altered as a result of human habitation. Starting in 1869 with a project to blast the reefs and create a port on Sand Island, the ecology of Midway has been changing. Birds native to other NWHI islands, such as the Laysan Rail and Laysan Finch, were released at Midway. Ironwood trees from Australia were planted to act as windbreaks. Seventy-five percent of the 200 species of plants on Midway are introduced. The location of Midway in the Pacific became important first to commercial airlines and, later, to the military. Midway was a convenient refueling stop on transpacific flights. It also became an important stop for Navy ships. Around 1940, the channel was widened, and construction of a Naval Air Station was completed.

Midway's importance to the U.S. was brought into focus on December 7, 1941. Six months later, on June 3, 1942, a naval battle near Midway resulted in the U.S. Navy exacting a devastating defeat of the Japanese Navy. This battle was, by some accounts, the beginning of the end of the Japanese Navy's control of the Pacific Ocean. 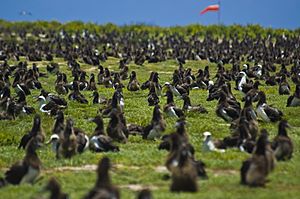 Midway Atoll is now home to 67-70% of the world's Laysan Albatross population, and 34-39% of the global Black-footed Albatross.

While Midway supports nearly three million birds, each seabird species has carved out a specific site on the atoll in which to nest. Seventeen different species of seabird can be found, the rarest of which is the Short-tailed Albatross, otherwise known as the “Golden Gooney.” Fewer than 2,200 are believed to exist due to excessive feather hunting in the late nineteenth century.

Over 250 different species of looli marine life are found in the 300,000 acres (120,000 ha) of lagoon and surrounding waters. The critically endangered Hawaiian monk seals raise their pups on the beaches. Monk seals are benthic foragers and rely on the Midway Atoll’s reef fish, squid, octopus and crustaceans. Green sea turtles, another threatened species, occasionally nest on the island. The first was found in 2006 on Spitsy Rinaia Island and another in 2007 on Sand Island. A resident pod of 300 spinner dolphins live in the lagoons and nearshore waters.

All content from Kiddle encyclopedia articles (including the article images and facts) can be freely used under Attribution-ShareAlike license, unless stated otherwise. Cite this article:
Midway Atoll Facts for Kids. Kiddle Encyclopedia.