The Hawaiian monk seal (Neomonachus schauinslandi) is an endangered species of earless seal in the family Phocidae that is endemic to the Hawaiian Islands.

The Hawaiian monk seal is one of two extant monk seal species; the other is the Mediterranean monk seal. A third species, the Caribbean monk seal, is extinct.

The Hawaiian monk seal is the only seal native to Hawaii, and, along with the Hawaiian hoary bat, is one of only two mammals endemic to the islands.

N. schauinslandi is a conservation reliant endangered species. The small population of about 1,400 individuals is threatened by human encroachment, very low levels of genetic variation, entanglement in fishing nets, marine debris, disease, and past commercial hunting for skins. There are many methods of conservation biology when it comes to endangered species; translocation, captive care, habitat cleanup, and educating the public about the Hawaiian monk seal are some of the methods that can be employed.

Known to native Hawaiians as ʻIlio-holo-i-ka-uaua, or "dog that runs in rough water", its scientific name is from Hugo Schauinsland, a German scientist who discovered a skull on Laysan Island in 1899. Its common name comes from short hairs on its head, said to resemble a monk. It is the official state mammal of Hawaii.

Its grey coat, white belly, and slender physique distinguish them from their cousin, the harbor seal (Phoca vitulina). The monk seal's physique is ideal for hunting its prey: fish, lobster, octopus and squid in deep water coral beds. When it is not hunting and eating, it generally basks on the sandy beaches and volcanic rock of the Northwest Hawaiian Islands.

The Hawaiian monk seal is part of the family Phocidae, being named so for its characteristic lack of external ears and inability to rotate its hind flippers under the body.

Monk seals, like elephant seals, shed their hair and the outer layer of their skin in an annual catastrophic molt. During the most active period of the molt, about 10 days for the Hawaiian monk seal, the seal remains on the beach. The hair, generally dark gray on the dorsal side and lighter silver ventrally, gradually changes color through the year with exposure to atmospheric conditions. Sunlight and seawater cause the dark gray to become brown and the light silver to become yellow-brown, while long periods of time spent in the water can also promote algae growth, giving many seals a green tinge. The juvenile coat of the monk seal, manifest in a molt by the time a pup is weaned is silver-gray; pups are born with black pelage. Many Hawaiian monk seals sport scars from shark attacks or entanglements with fishing gear. Maximum life expectancy is 25 to 30 years. 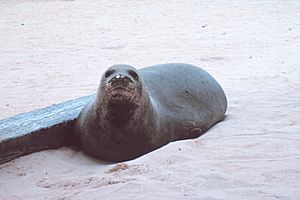 The monk seals are members of the Phocidae. In an influential 1977 paper, Repenning and Ray proposed, based on certain unspecialized features, that they were the most primitive living seals. However, this idea has since been entirely superseded.

In an effort to inform the public and conserve the seals, the National Oceanic Atmospheric Administration (NOAA) Fisheries Service developed a historical timeline to demonstrate that the Hawaiian islands has been home to the seals for millions of years and that the seals belong there. Evidence points to monk seals migrating to Hawaii between 4–11 million years ago (mya) through an open water passage between North and South America called the Central American Seaway. The Isthmus of Panama closed the Seaway approximately 3 million years ago.

Berta and Sumich ask how this species came to the Hawaiian Islands when its closest relatives are on the other side of the world in the North Atlantic and Mediterranean Sea. The species may have evolved in the Pacific or Atlantic, but in either case, came to Hawaii long before the first Polynesians. 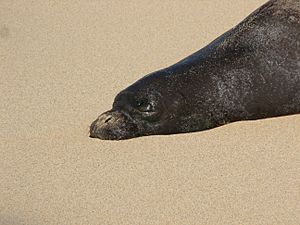 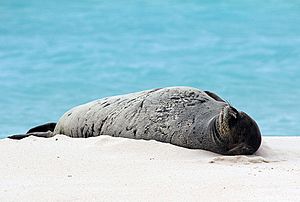 The fetus takes nine months to develop, with birth occurring between March and June. Pups start around 16 kg (35 lb) and are about 1 m (3 ft 3 in) long. They can have 1 baby pup a year.

The pups are born on beaches and nursed for about six weeks. The mother does not eat or leave the pup while nursing. After that time, the mother deserts the pup, leaving it on its own, and returns to the sea to forage for the first time since the pup's arrival. 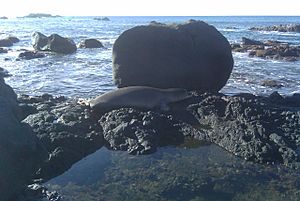 A Hawaiian monk seal observed on the North Shore of Oahu, near Waimea Bay.

Most seals are found on the Northwestern Hawaiian Islands.

The Hawaiian monk seal is endangered, although its cousin species, the Mediterranean monk seal (M. monachus), is even rarer, and the even more closely related Caribbean monk seal (N. tropicalis), last sighted in the 1950s, was officially declared extinct in June 2008. The total population of Hawaiian monk seals is in decline – the larger population that inhabits the northwest islands is declining while the smaller population on the main islands is increasing. In 2010, it was estimated that only 1100 individuals remained. A later estimate in 2016, which included a more complete survey of small populations, was approximately 1400 individuals.

The Hawaiian monk seal was officially designated as an endangered species on November 23, 1976, and is now protected by the Endangered Species Act and the Marine Mammal Protection Act. It is illegal to kill, capture or harass a Hawaiian monk seal. Even with these protections, human activity along Hawaii's fragile coastlines (and in the world at large) still provides many stressors. 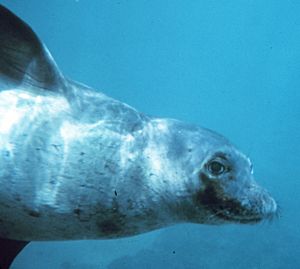 Reduced prey abundance can lead to starvation, with one cause being reduction in habitat associated with environmental change. Habitat is shrinking due to erosion in the Northwest Hawaiian Islands, reducing the size of islands/beaches. Lobsters, the seals' preferred food other than fish, have been overfished. Competition from other predators such as sharks, jacks, and barracudas leaves little for developing pups. The creation of Papahānaumokuākea Marine National Monument which encloses these islands may expand food supplies.

In the nineteenth century, large numbers of seals were killed by whalers and sealers for meat, oil and skin. U.S. military forces hunted them during World War II, while occupying Laysan Island and Midway.

Monk seals can be affected by the toxoplasmosis pathogen in cat feces that enters the ocean in polluted runoff and wastewater, a new phenomenon. Since 2001, toxoplasmosis has killed at least eleven seals. Other human-introduced pathogens, including leptospirosis, have infected monk seals.

Human disturbances have had immense effects on the populations of the Hawaiian monk seal. Monk seals tend to avoid beaches where they are disturbed; after continual disturbance the seal may completely abandon the beach, thus reducing its habitat size, subsequently limiting population growth. For instance, large beach crowds and beach structures limit the seal's habitat. Although the WWII military bases in the northwestern islands were closed, minimal human activities can be enough to disturb the species.

Marine fisheries can potentially interact with monk seals via direct and indirect relationships. Directly the seal can become snared by fishing equipment, entangled in discarded debris, and even feed on fish refuse. Although international law prohibits the intentional discarding of debris from ships at sea, entanglement still results in mortality because the seals get trapped in unintentional marine debris such as fishing nets and cannot maneuver or even reach the surface to breathe. Monk seals have one of the highest documented rates of entanglement of any pinniped species. 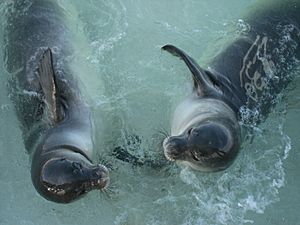 All content from Kiddle encyclopedia articles (including the article images and facts) can be freely used under Attribution-ShareAlike license, unless stated otherwise. Cite this article:
Hawaiian monk seal Facts for Kids. Kiddle Encyclopedia.