The Galapagos shark (Carcharhinus galapagensis) is a species of Requiem shark, in the order of Carcharhiniformes. The Galapagos shark is a large species, reaching a maximum length of up to 12.1 feet (3.8 metres), and weighing up to 86 kg. This species is found in tropical waters surrounding oceanic islands, and is found in the Pacific, Atlantic, and western Indian Ocean. 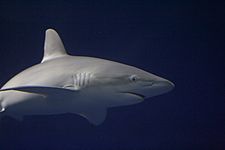 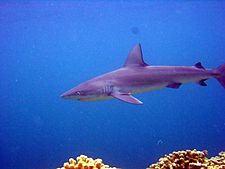 The Galapagos shark is circumtropical in distribution with a preference for waters surrounding oceanic islands. In the Atlantic Ocean, this shark is found at St. Paul's Rocks, Ascension Island, Cape Verde, Saint Helena, São Tomé, Bermuda, and the Virgin Islands. In the western Indian Ocean it is found off Walter's Shoal, south of Madagascar. In the Pacific Ocean, the Galapagos shark is found off Lord Howe Island, Tuamoto Archipelago, Middleton and Elizabeth Reefs, Hawaii, Revillagigedo Islands, Clipperton Island, Cocos Island, and Galápagos Islands. Distribution limits are not well defined due to confusion with similar species of sharks.

The Galapagos shark is a common, but habitat-limited, tropical shark found inshore as well as offshore, near insular and continental shelves, between 39°N-33°S, at depths up to 180 metres. This species prefers clear water with coral and rocky bottoms. Although it is a coastal-pelagic species, it is capable of crossing considerable distances of open ocean between islands, and has been reported at least 50 km from land. Young Galapagos sharks are found in shallow waters of 25 metres or less.

The Galapagos shark is known to be a solitary species, but it is sometimes found in loose groups. It is a curious species, and is known to approach swimmers and investigate other disturbances in the water, such as boats and divers. The Galapagos shark can be an aggressive animal, and, like other species of sharks, it performs a display in order to attack its target. This display involves arching its back, raising its head, and lowering its pectoral fins as it swims with a noticeable twisting motion. 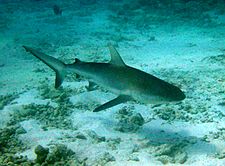 The Galapagos shark usually hunts near the bottom, feeding on bottom-dwelling fish, but it is also been known to feed on prey from the surface. The fish it preys on include eels, flatheads, groupers, flatfish, and triggerfish. It also feeds on squid and octopuses. In the Galápagos Islands, off the coast of Ecuador, the Galapagos shark has been observed to feed on sea lions and marine iguanas. Occasionally, a large Galapagos shark may feed on other sharks.

Galapagos sharks are viviparous, or livebearing, with embryos nourished by a yolksac-placenta during gestation. Mating and birth occurs early in the year within Hawaiian waters. Female individuals often have mating scars from males biting the gills, fins, and body. Each litter contains 6 to 16 pups, each being 60-80 cm long. The pups stay in shallow waters to avoid predation and cannibalism from members of their own species, eventually moving out to deeper waters as they mature. Galapagos sharks do not reproduce until the age of 10 years, with the maximum known lifespan for a Galapagos shark being approximately 24 years.

According to the International Shark Attack File, the Galapagos shark has been responsible for one fatal attack on a swimmer in the Virgin Islands. In locations where this shark is common, they often are attracted to divers, sometimes even becoming an obstacle. When divers take aggressive actions, these sharks are not discouraged, but instead become more excited. The Galapagos shark has been reported to display threat behaviors including arching of the back, raising the head, and lowering the caudal and pectoral fins while swimming in a twisted, rolling motion.

This species is considered potentially dangerous and may attack if a food source is present, such as during spearfishing activities. If there are large numbers of Galapagos sharks present, it would be wise to limit one's activities in the water. 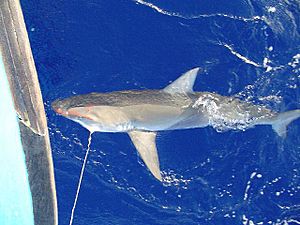 Galapagos shark hooked on a longline off Hawaii

The Galapagos shark is currently listed as Near Threatened by the International Union for the Conservation of Nature (IUCN). However, the Galapagos shark might be listed as Vulnerable, Endangered, or Critically Endangered in the near future. In Australia and the western Pacific Ocean, the Galapagos shark is considered "Data Deficient" due to a lack of information on populations in this region. However, there is a marine reserve that surrounds this species' range off Lord Howe Island and the Kermadec Islands (New Zealand), where it is not considered to be under threat.

All content from Kiddle encyclopedia articles (including the article images and facts) can be freely used under Attribution-ShareAlike license, unless stated otherwise. Cite this article:
Galapagos shark Facts for Kids. Kiddle Encyclopedia.