Papahānaumokuākea supports 7,000 species. One quarter of the species are endemic. 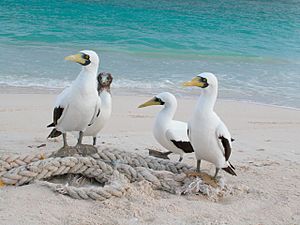 The monument supports 7,000 species, one quarter of which are endemic. Prominent species include the endangered hawksbill sea turtle, the threatened green sea turtle and the endangered Hawaiian monk seal, the Laysan and Nihoa finches, the Nihoa millerbird, Laysan duck, seabirds such as the Laysan albatross, numerous species of plants including Pritchardia palms, and many species of arthropods. According to the Pew Charitable Trusts, populations of lobster have not recovered from extensive harvesting in the 1980s and 1990s, which is now banned; the remaining fisheries are overfished.

The National Marine Fisheries Service (NMFS) reports that many species populations have not yet fully recovered from a large-scale shift in the oceanic ecosystem that affected the North Pacific during the late 1980s and early 1990s. This shift reduced populations of important species such as spiny lobster, seabirds and Hawaiian monk seals. Commercial fishing ended in 2011. The monument receives strict conservation protection, with exceptions for traditional Native Hawaiian uses and limited tourism.

The monument covers roughly 583,000 square miles (1,510,000 km2) of reefs, atolls and shallow and deep sea (out to 200 miles (320 km) offshore) in the Pacific Ocean – larger than all of America's National Parks combined. It contains approximately 10 percent of the tropical shallow water coral reef habitat (i.e., 0 to 100 fathoms) in U.S. territory. It is slightly larger than Australia's Great Barrier Reef Marine Park, approximately the size of the country of Germany, and just slightly smaller than Montana.

The islands included in the monument are all part of the State of Hawaii, except Midway Atoll, which is part of The United States Minor Outlying Islands insular area. Henderson Field, on Midway Atoll, provides aerial access to the monument.

All content from Kiddle encyclopedia articles (including the article images and facts) can be freely used under Attribution-ShareAlike license, unless stated otherwise. Cite this article:
Papahānaumokuākea Marine National Monument Facts for Kids. Kiddle Encyclopedia.