Honolulu is the capital and largest city of the U.S. state of Hawaii. It is an unincorporated part of and the county seat of the City and County of Honolulu on the island of Oahu. The city is the main gateway to Hawaii and a major portal into the United States. The city is also a major hub for international business, military defense, as well as famously being host to a diverse variety of east-west and Pacific culture, cuisine, and traditions.

Honolulu is the most remote city of its size in the world and is both the westernmost and the southernmost major U.S. city. For statistical purposes, the U.S. Census Bureau recognizes the approximate area commonly referred to as "City of Honolulu" (not to be confused with the "City and County") as a census county division (CCD). Honolulu is a major financial center of the islands and of the Pacific Ocean. The population of the city of Honolulu was 337,256 as of the 2010 census, while the Honolulu CCD was 390,738 and the population of the consolidated city and county was 953,207.

Honolulu means "sheltered harbor" or "calm port". The old name is said to be Kou, a district roughly encompassing the area from Nuuanu Avenue to Alakea Street and from Hotel Street to Queen Street which is the heart of the present downtown district. The city has been the capital of the Hawaiian Islands since 1845 and gained historical recognition following the attack on Pearl Harbor by Japan near the city on December 7, 1941.

As of 2015[update], Honolulu was ranked high on world livability rankings, and was also ranked as the 2nd safest city in the U.S. It is also the most populated Oceanian city outside Australasia and ranks second to Auckland as the most populous city in Polynesia.

Evidence of the first settlement of Honolulu by the original Polynesian migrants to the archipelago comes from oral histories and artifacts. These indicate that there was a settlement where Honolulu now stands in the 11th century. However, after Kamehameha I conquered Oʻahu in the Battle of Nuʻuanu at Nuʻuanu Pali, he moved his royal court from the Island of Hawaiʻi to Waikīkī in 1804. His court relocated in 1809 to what is now downtown Honolulu. The capital was moved back to Kailua-Kona in 1812.

In 1794, Captain William Brown of Great Britain was the first foreigner to sail into what is now Honolulu Harbor. More foreign ships followed, making the port of Honolulu a focal point for merchant ships traveling between North America and Asia.

In 1845, Kamehameha III moved the permanent capital of the Hawaiian Kingdom from Lahaina on Maui to Honolulu. He and the kings that followed him transformed Honolulu into a modern capital, erecting buildings such as St. Andrew's Cathedral, ʻIolani Palace, and Aliʻiōlani Hale. At the same time, Honolulu became the center of commerce in the islands, with descendants of American missionaries establishing major businesses in downtown Honolulu.

Despite the turbulent history of the late 19th century and early 20th century, such as the overthrow of the Hawaiian monarchy in 1893, Hawaiʻi's subsequent annexation by the United States in 1898, followed by a large fire in 1900, and the Japanese attack on Pearl Harbor in 1941, Honolulu remained the capital, largest city, and main airport and seaport of the Hawaiian Islands.

An economic and tourism boom following statehood brought rapid economic growth to Honolulu and Hawaiʻi. Modern air travel brings, as of 2007[update], 7.6 million visitors annually to the islands, with 62.3% entering at Honolulu International Airport. Today, Honolulu is a modern city with numerous high-rise buildings, and Waikīkī is the center of the tourism industry in Hawaiʻi, with thousands of hotel rooms. The UK consulting firm Mercer, in a 2009 assessment "conducted to help governments and major companies place employees on international assignments", ranked Honolulu 29th worldwide in quality of living; the survey factored in political stability, personal freedom, sanitation, crime, housing, the natural environment, recreation, banking facilities, availability of consumer goods, education, and public services including transportation. 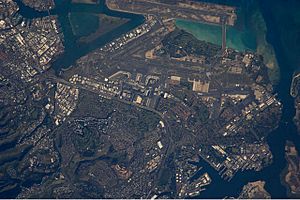 Honolulu is the most remote major city in the world. The closest location on the mainland to Honolulu is the Point Arena Lighthouse in California, at 2,045 nautical miles (3,787 km). (Nautical vessels require some additional distance to circumnavigate Makapuʻu Point.) However, part of Mexico and part of the Aleutian Islands of Alaska are slightly closer to Honolulu than the mainland. 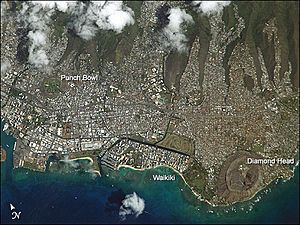 Honolulu as seen from the International Space Station 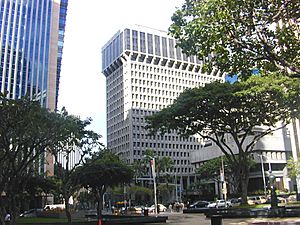 Honolulu experiences a hot semi-arid climate (Köppen classification BSh), with a mostly dry summer season, due to a rain shadow effect. Temperatures vary little throughout the months, with average high temperatures of 80–90 °F (27–32 °C) and average lows of 65–75 °F (18–24 °C) throughout the year. Temperatures reach or exceed 90 °F (32 °C) on an average 38 days annually, with lows in the upper 50s °F (14–15 °C) occurring once or twice a year. The highest recorded temperature was 95 °F (35 °C) during a heat wave in September 1998. The highest recorded temperature in the state was also recorded later that day in Ni'ihau. The lowest recorded temperature was 52 °F (11 °C) on February 16, 1902, and January 20, 1969. With high temperatures and humidity there is a vast tropical influence on the climate, although rainfall falls short of that classification.

Annual average rainfall is 17.05 in (433 mm), which mainly occurs during the winter months of October through early April, with very little rainfall during the summer; similar to California's mediterranean climates. However, both seasons experience a similar number of rainy days. Light showers occur in summer while heavier rain falls during winter. Honolulu has an average of 278 sunny days and 90 rainy days per year.

Although the city is situated in the tropics, hurricanes are quite rare. The last recorded hurricane that hit the area was Category 4 Hurricane Iniki in 1992. Tornadoes are also uncommon and usually strike once every 15 years. Waterspouts off the coast are also uncommon, hitting about once every five years.

Honolulu falls under the USDA 12a Plant Hardiness zone.

Panorama of Honolulu's waterfront in February 2007. 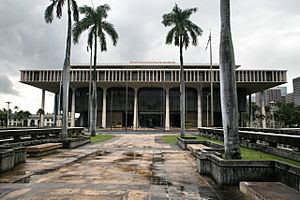 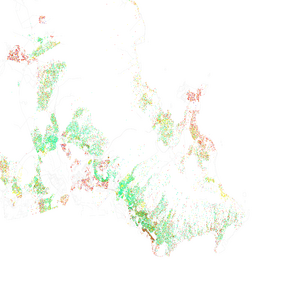 Map of racial distribution in Honolulu, 2010 U.S. Census. Each dot is 25 people: White, Black, Asian Hispanic, or Other (yellow)

Honolulu's urban area was the fourth densest in the United States according to the 2010 U.S. Census. 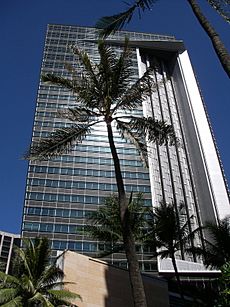 With symbolic native-styled architectural features, First Hawaiian Center is the tallest building in Hawaii and home to a Honolulu Museum of Art Spalding House gallery

The Bishop Museum is the largest of Honolulu's museums. It is endowed with the state's largest collection of natural history specimens and the world's largest collection of Hawaiiana and Pacific culture artifacts. The Honolulu Zoo is the main zoological institution in Hawaii while the Waikiki Aquarium is a working marine biology laboratory. The Waikiki Aquarium is partnered with the University of Hawaii and other universities worldwide. Established for appreciation and botany, Honolulu is home to several gardens: Foster Botanical Garden, Liliʻuokalani Botanical Garden, Walker Estate, among others.

Established in 1900, the Honolulu Symphony is the second oldest US symphony orchestra west of the Rocky Mountains. Other classical music ensembles include the Hawaii Opera Theatre. Honolulu is also a center for Hawaiian music. The main music venues include the Hawaii Theatre, the Neal Blaisdell Center Concert Hall and Arena, and the Waikiki Shell.

Various institutions for the visual arts are located in Honolulu.

The Honolulu Museum of Art is endowed with the largest collection of Asian and Western art in Hawaii. It also has the largest collection of Islamic art, housed at the Shangri La estate. Since the merger of the Honolulu Academy of Arts and The Contemporary Museum, Honolulu (now called the Honolulu Museum of Art Spalding House) in 2011, the museum is also the only contemporary art museum in the state. The contemporary collections are housed at main campus (Spalding House) in Makiki and a multi-level gallery in downtown Honolulu at the First Hawaiian Center. The museum hosts a film and video program dedicated to arthouse and world cinema in the museum's Doris Duke Theatre, named for the museum's historic patroness Doris Duke.

The Hawaii State Art Museum (also downtown) boasts pieces by local artists as well as traditional Hawaiian art. The museum is administered by the Hawaii State Foundation on Culture and the Arts.

Honolulu also annually holds the Hawaii International Film Festival (HIFF). It showcases some of the best films from producers all across the Pacific Rim and is the largest "East meets West" style film festival of its sort in the United States. 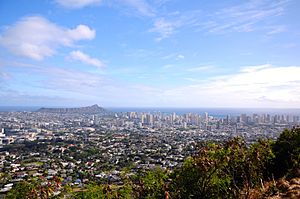 Diamond Head and Honolulu viewed from Round Top Drive 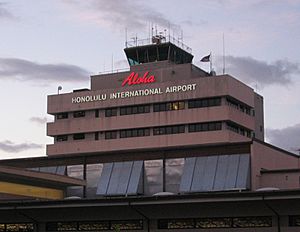 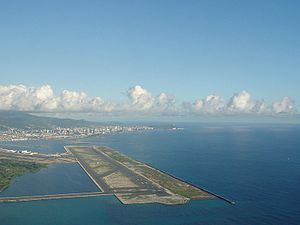 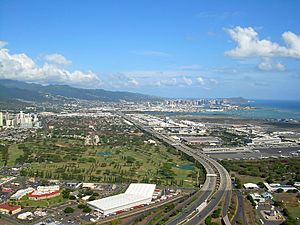 Located at the western end of the CDP, Honolulu International Airport (HNL) is the principal aviation gateway to the state of Hawaii. Kalaeloa Airport is primarily a commuter facility used by unscheduled air taxis, general aviation and transient and locally based military aircraft.

Honolulu has been ranked as having the nation's worst traffic congestion, beating former record holder Los Angeles. Drivers waste on average over 58 hours per year on congested roadways. The following freeways, part of the Interstate Highway System serve Honolulu:

Other major highways that link Honolulu CCD with other parts of the Island of Oahu are:

Like most major American cities, the Honolulu metropolitan area experiences heavy traffic congestion during rush hours, especially to and from the western suburbs of Kapolei, 'Ewa Beach, Aiea, Pearl City, Waipahu, and Mililani.

There is a Hawaii Electric Vehicle Demonstration Project (HEVDP).

In November 2010, voters approved a charter amendment to create a public transit authority to oversee the planning, construction, operation and future extensions to Honolulu's future rail system. The Honolulu Authority for Rapid Transportation (HART) currently includes a 10-member board of directors; three members appointed by the mayor, three members selected by the Honolulu City Council, and the city and state transportation directors. The opening of the Honolulu Rail Transit is delayed until approximately 2018, as HART canceled the initial bids for the first nine stations and intends to rebid the work as three packages of three stations each, and allow more time for construction in the hope that increased competition on smaller contracts will drive down costs; initial bids ranged from $294.5 million to $320.8 million, far surpassing HART's budget of $184 million.

Established by former Mayor Frank F. Fasi as the replacement for the Honolulu Rapid Transit Company (HRT), Honolulu's TheBus system was honored in 1994–1995 and 2000–2001 by the American Public Transportation Association as "America's Best Transit System". TheBus operates 107 routes serving Honolulu and most major cities and towns on Oahu. TheBus comprises a fleet of 531 buses, and is run by the non-profit corporation Oahu Transit Services in conjunction with the city Department of Transportation Services. Honolulu is ranked 4th for highest per-capita use of mass transit in the United States.

The City and County of Honolulu is currently constructing a 20-mile (32 km) rail transit line that will connect Honolulu with cities and suburban areas near Pearl Harbor and in the Leeward and West Oahu regions. The Honolulu High-Capacity Transit Corridor Project is aimed at alleviating traffic congestion for West Oahu commuters while being integral in the westward expansion of the metropolitan area. The project, however, has been criticized by opponents of rail for its cost, delays, and potential environmental impacts, but the line is expected to have large ridership.

All content from Kiddle encyclopedia articles (including the article images and facts) can be freely used under Attribution-ShareAlike license, unless stated otherwise. Cite this article:
Honolulu Facts for Kids. Kiddle Encyclopedia.