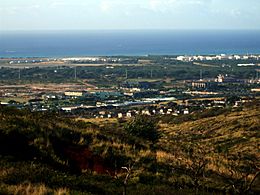 Kapolei is a master-planned community in Honolulu County, Hawaii, United States, on the island of Oahu. It is colloquially known as the "second city" of Oahu, in relation to Honolulu. Officially, it is a census-designated place (CDP) within the consolidated city-county of Honolulu.

The community takes its name from a volcanic cone, Puʻu o Kapolei. In the Hawaiian language, puʻu means "hill" and Kapo lei means "beloved Kapo". According to legend, Kapo, Goddess of Fertility was sister to Pele, Goddess of Fire and Namaka Goddess of the Sea.

Much of the land is part of the estate of industrialist James Campbell. Kapolei's major developer is Kapolei Property Development, a subsidiary of James Campbell Company. Kapolei sits primarily upon former sugarcane and pineapple fields.

The original development objectives for the City of Kapolei were to include: an employment center, a new center for offices and businesses, a center for government offices, a city of people walking, biking, or bussing, the latest energy efficient technologies such as water conservation and recycling, and the most efficient connectivity for commuting on Oahu. In essence a "smart city". The design plan for development ensures that the 7 themes of Kapolei remain the same throughout its construction. These include 1. Hawaiian Garden City 2. Healthy Living 3. Complete Community Services 4. Pedestrian friendly 5. Past/Present/Future design architecture 6. Sustainability 7. Technology.

Kapolei is quickly becoming the second urban center of Oahu, Hawaii's most densely populated island. Much of Oahu's future population growth is projected for the Kapolei area, ʻEwa Plain, and southern slopes of the island's central valley, between Waipahu near Pearl Harbor and Wahiawa near the island's center.

Other communities in the Kapolei area are the census-designated places of Makakilo and Naval Air Station Barbers Point (now known as Kalaeloa), the industrial area known as Campbell Industrial Park with its deepwater port, Barbers Point Harbor, and the resort and marina community of Ko Olina, which includes the Disney Aulani Resort and Ko Olina Golf Club.

Ongoing road construction has not resolved continuing traffic problems. A Manawai Street-Kama‘aha Avenue extension was completed in August 2006 and helped to reduce congestion along Kamokila Boulevard and Farrington Highway. Kapolei Property Development began construction in January 2007 on a $2 million road to extend Kamokila Boulevard from Kapolei Parkway to Roosevelt Avenue. Kapolei Property Development recently contributed $6 million for a joint project with the State Department of Transportation for an additional freeway on-ramp.

Although state and county governments and some of Hawaii's largest companies have significant workplaces in Kapolei, population growth has far out-paced local job creation. A majority of Kapolei adults work in Honolulu, congesting the main traffic artery, Interstate H-1. In December 2006, the Honolulu City Council approved a fixed-guideway elevated rail system connecting Kapolei to Downtown Honolulu. In January 2007, Oahu residents saw an increase of 0.5 percent to the general excise tax to help cover the costs of construction of the system. The project broke ground in East Kapolei on February 22, 2011. Work on the foundations for the concrete pillars began shortly after in Waipahu; work to install the pillars started in East Kapolei in April 2012.

All content from Kiddle encyclopedia articles (including the article images and facts) can be freely used under Attribution-ShareAlike license, unless stated otherwise. Cite this article:
Kapolei, Hawaii Facts for Kids. Kiddle Encyclopedia.