Downtown Honolulu is the current historic, economic, and governmental center of Honolulu, the capital and largest city of the U.S. state of Hawaii. It is bounded by Nuʻuanu Stream to the west, Ward Avenue to the east, Vineyard Boulevard to the north, and Honolulu Harbor to the south. Both modern and historic buildings and complexes are located in the area, with many of the latter declared National Historic Landmarks on the National Register of Historic Places.

Downtown Honolulu can be subdivided into four neighborhoods, each with its own central focus and mix of buildings. These areas are the Capitol District, the Central Business District, Chinatown, and the Waterfront. 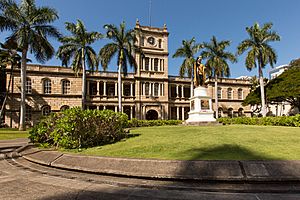 The iconic Aliʻiōlani Hale captured within the Capitol District of Honolulu

The Capitol District, or Civic Center, contains most of the federal, state, and city governmental buildings and is centered on the Hawaiʻi State Capitol, ʻIolani Palace, and Honolulu Hale (city hall). It is roughly bounded by Richards Street on the west, Ward Avenue on the east, Vineyard Boulevard to the north, and Nimitz Highway to the south. Significant buildings in this area include:

Centered on Bishop Street and Fort Street Mall, the central business district is roughly bounded by Nuʻuanu Avenue, Nimitz Highway, Richards Street, and Vineyard Boulevard. This area contains most of the headquarters buildings of Hawaiʻi-based companies and most of the skyscrapers. Buildings in this area include: 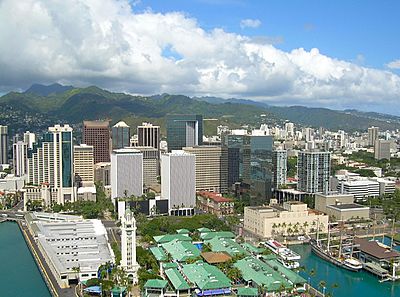 An aerial view of downtown Honolulu, Hawaiʻi taken on April 7, 2007. In the foreground is Aloha Tower, a clock tower and lighthouse greeting visitors to Honolulu Harbor since 1926. In the center of the photo is First Hawaiʻian Center, the tallest building and oldest bank in Hawaiʻi. In the lower right is the Falls of Clyde, the only surviving iron-hulled, four-masted full rigged ship, and the only surviving sail-driven oil tanker in the world. The Falls of Clyde is now a museum ship in Honolulu Harbor. 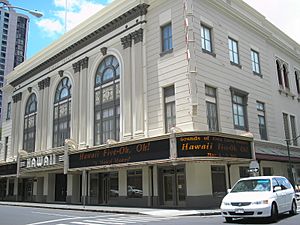 Located between Nuʻuanu Stream and Nuʻuanu Avenue, Chinatown at one time was the center of Chinese cultural contact on the island. Central to this area is the open-air Oʻahu Market. The area around Nuʻuanu Avenue has become an Arts District, thanks to the renovation of the Hawaiʻi Theatre. Buildings in this area include: 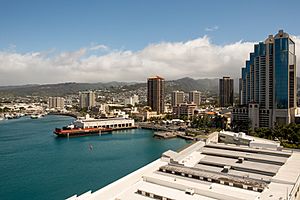 The Waterfront District of Honolulu with Harbor Court on the far right.
Main page: Honolulu Harbor

Honolulu's waterfront area centers on Aloha Tower, which was once the tallest building in Hawaiʻi and where cruise ships would dock before the advent of air travel between Hawaiʻi and the U.S. Mainland. Recently, cruise ships between the Hawaiian Islands now dock at Honolulu Harbor. Buildings in this area include:

All content from Kiddle encyclopedia articles (including the article images and facts) can be freely used under Attribution-ShareAlike license, unless stated otherwise. Cite this article:
Downtown Honolulu Facts for Kids. Kiddle Encyclopedia.