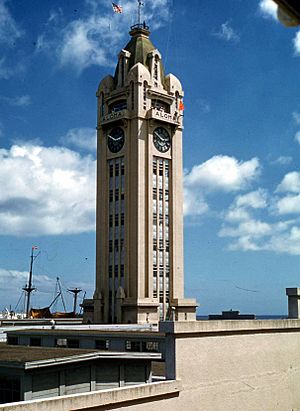 The Aloha Tower is a retired lighthouse that is considered one of the landmarks of the state of Hawaii in the United States. Opened on September 11, 1926, at a then astronomical cost of $160,000, the Aloha Tower is located at Pier 9 of Honolulu Harbor. It has been, and continues to be, a guiding beacon welcoming vessels to the City and County of Honolulu. Just as the Statue of Liberty greeted hundreds of thousands of immigrants each year to New York City, the Aloha Tower greeted hundreds of thousands of immigrants to Honolulu. At 10 stories and 184 feet (56 m) of height topped with 40 feet (12 m) of flag mast, for four decades the Aloha Tower was the tallest structure in Hawaii. It was built in the Hawaiian Gothic architectural style.

When the attack on Pearl Harbor came on December 7, 1941, Coast Guardsmen from the USCGC Taney (WHEC-37) were ordered to take up defensive positions around Aloha Tower and protect it from being occupied. The Aloha Tower was painted in camouflage to disappear at night.

In 1981, the Governor of Hawaii and the Hawaii State Department of Business, Economic Development and Tourism established the Aloha Tower Development Corporation. The public corporation was charged with developing the land around the Aloha Tower to benefit the state's commercial trade industry based at Honolulu Harbor while at the same time providing the residents of Hawaii with ample access to the downtown waterfront. The entire Aloha Tower Complex, as defined by the public corporation, was identified as Piers 5 and 6, Piers 8 through 23, and portions of Nimitz Highway and Iwilei.

Docked at the royal pier is the Falls of Clyde, a historic shipping vessel.

The Aloha Tower Development Corporation continues its work today with plans to modernize the facilities and infrastructure in and around the Aloha Tower Complex. Its most significant hurdle is to find a way of making travel through Nimitz Highway more efficient. In 2004, a controversial proposal was made to construct an underground highway tunnel beneath the complex. Other proposals include the establishment of streetcars, elimination of commercial high-rises in the area and increase of high-rise residential units instead. State officials want to close the parking lot fronting the Aloha Tower and destroy the adjacent Hawaiian Electric Company power plant, then fill the space with a park. In consideration of heightened security measures after 9/11, tourist access to the observation deck was restricted, but has since been reopened.

Today, Hawaii Pacific University has purchased and is continuing to redevelop the space. Portions of the second and third floor are now used as student housing with 370 beds. The ground floor features the HPU Welcome Center, eSports arena, as well as other student facilities. The Old Spaghetti Factory moved in as of 2018 and the Star of Honolulu Dinner Cruise operates out of pier 8 side of the marketplace. Aloha Tower Marketplace also has several indoor and outdoor events spaces available for public and private events.

All content from Kiddle encyclopedia articles (including the article images and facts) can be freely used under Attribution-ShareAlike license, unless stated otherwise. Cite this article:
Aloha Tower Facts for Kids. Kiddle Encyclopedia.