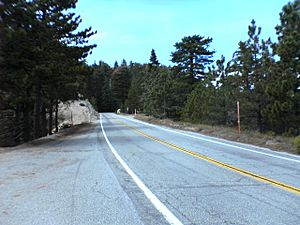 Highway is a word used to describe roads made for travel by the public between important places, such as cities, towns and landmarks. The word highway can also be different between countries, and can mean a road, freeway, superhighway, autoroute, autobahn, parkway, expressway, autostrasse, autostrada, byway, or motorway.

Highways come in many different designs. They can include many lanes of traffic, a median (strip of lane or barrier) between lanes of opposing traffic, and access control (ramps and bridges). Highways can also be as simple as a two-lane road.

In many countries, these roads are numbered to easily tell them apart. These numbered highways are usually called routes. The United States includes a system called the Interstate Highway system, controlled by AASHTO, where major north/south routes are odd numbered and east/west are even numbered. In Canada, routes that are in the 400s are freeways. In China, types of routes are separated by the first letter of the route; "G" for national road, "S" for provincial road and "Y" for rural roads.

Highways are sometimes criticised because of the pollution cars make when driving highways. When too many cars travel along a highway, traffic slows down; this is known as a traffic jam. Public transportation (such as buses) and special lanes for those who have a given number of people in a car are used to help stop these problems.

All content from Kiddle encyclopedia articles (including the article images and facts) can be freely used under Attribution-ShareAlike license, unless stated otherwise. Cite this article:
Highway Facts for Kids. Kiddle Encyclopedia.