Hanover (German: Hannover) is a German city. It is the capital of the federal state of Lower Saxony. Hanover has 522,944 inhabitants (1 February 2007). 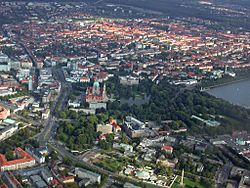 In Hanover there are some big industry companies like Volkswagen (Cars and Vans), Continental (tyres), Varta (batteries) and TUI (tourism).

Hanover has a very modern zoo and an international airport.

There are some very big fairs in Hanover like the CeBIT - Centre of Office, Information and Telecommunication (B is for Büro that means office) and the traditional Hanover fair that shows classical industrial products.

Hanover has a large forest near the inner city, it is called the Eilenriede. There is also a lake (the Maschsee) of about three km length and 500 m width near the city centre. The famous gardens of Herrenhausen (Herrenhäuser Gärten) are also in Hanover. The gardens were heavily destroyed in WWII, but they are currently under reconstruction.

People in Hannover get around town by using the Hannover Hauptbahnhof, which has been around since 1843. 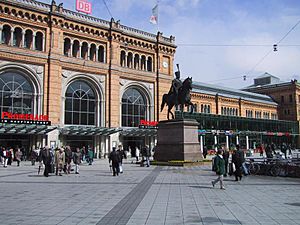 The (new) town hall is one of the famous buildings in the city, others are the Marktkirche (market church), the old (medieval) town hall, some castles like the Leineschloss and the Welfenschloss.

Hanover is located at the river Leine.

Some internationally famous inhabitants of the town are:

Key employers in the region are Volkswagen, Continental, Talanx, Hannover Re, Nord LB and VHV.

Hanover has a famous football club, Hannover 96, since 2002 (again) a member of the first German football league, the Bundesliga. Its home stadium is the AWD-Arena (capacity: 49000). Hanover is also a center for ice hockey.

All content from Kiddle encyclopedia articles (including the article images and facts) can be freely used under Attribution-ShareAlike license, unless stated otherwise. Cite this article:
Hanover Facts for Kids. Kiddle Encyclopedia.