The Mercedes-Benz Citaro (or O530) is a single-decker bus for public transport,

It was made in 1997, and built in Mannheim (Germany), Ligny-en-Barrois (France) and Sámano (Spain), It features a low floor for easy access. 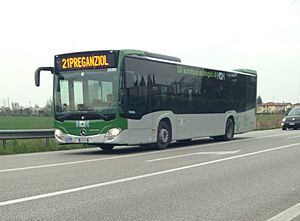 All content from Kiddle encyclopedia articles (including the article images and facts) can be freely used under Attribution-ShareAlike license, unless stated otherwise. Cite this article:
Mercedes-Benz Citaro Facts for Kids. Kiddle Encyclopedia.