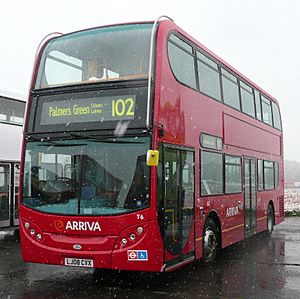 Arriva London is a bus company. It is a division of Arriva, which operates services in Greater London. It is made up of Grey Green, Leaside Buses and London Country bus operations, that splits into the north and the south.

All content from Kiddle encyclopedia articles (including the article images and facts) can be freely used under Attribution-ShareAlike license, unless stated otherwise. Cite this article:
Arriva London Facts for Kids. Kiddle Encyclopedia.