Edmonton is an area in the east of the London Borough of Enfield, England, 8.6 miles (13.8 km) north-north-east of Charing Cross. It has a long history as a settlement distinct from Enfield.

Edmonton is 8.6 miles (13.8 km) north-north-east of Charing Cross and stretches from just south of the North Circular Road where it borders Tottenham to its boundary with Ponders End to the north. Bush Hill Park, Winchmore Hill and Palmers Green adjoin the western boundary while the River Lee Diversion forms Edmonton's eastern boundary with Chingford. The northern part of Edmonton, N9 postal area is known as Lower Edmonton and the southern part as Upper Edmonton, N18 postal area. 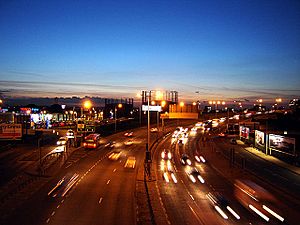 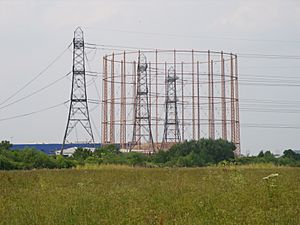 The old highway Ermine Street passed through what is today Edmonton. Ermine Street was the main Roman Road from London through Lincoln and on to York. Edmonton appears in the Domesday Book of 1086, where it is recorded as Adelmetone- 'a farmstead or estate of a man called Ēadhelm' from an Old English personal name and tūn.

Edmonton Hundred was a division of the historic county of Middlesex from Saxon times, an area of some 31,000 acres (125 km2) stretching up the west bank of the Lea from Tottenham to the county boundary south of Waltham Cross, and west into what is now Hertfordshire as far as South Mimms. Local government in the modern sense began in 1837 with the Edmonton Union, set up under the Poor Law Amendment Act 1834. This also covered a wide district of 47,102 acres (191 km2), including the modern boroughs of Haringey and Enfield, plus Cheshunt, Waltham Abbey and Waltham Cross. The town hall was built in 1884 and extended in 1903.

The population of this area grew rapidly, reaching 445,875 by 1911 and would today be about 615,000. As the population mushroomed Middlesex was subdivided into many small local government areas, a much smaller Edmonton of 3894 acres (16 km2) eventually achieving the status of borough (main article Municipal Borough of Edmonton) in 1937. At the 1961 census the borough had a population of 91,956. This was absorbed into the London Borough of Enfield in 1965, and the former Town Hall and civic buildings were controversially demolished by Enfield Council in 1989.

Pymmes Park with its historic walled garden is Upper Edmonton's park. Pymmes Park originated as a private estate. In the late 16th century it was owned by the powerful Cecil family. In 1589 Robert Cecil, later 1st Earl of Salisbury, spent his honeymoon at Pymmes. Cecil was a protege of Francis Walsingham, Elizabeth I's chief spymaster and he succeeded him as Secretary of State in 1590. The estate was eventually acquired by Edmonton Council and opened as a public park in 1906. Pymmes House was destroyed by fire during World War II and the remains were demolished.

In the 17th century the then rural Edmonton had a reputation for supernatural activities. In approximately 1600, a play entitled The Merry Devil of Edmonton was performed in London about a wizard who lived there. In 1621 the villagers accused an old woman, Elizabeth Sawyer, of witchcraft and she was subsequently executed at Tyburn; her story was told in a pamphlet by Henry Goodcole, and in a 1621 play entitled The Witch of Edmonton.

The historic All Saints' Church is situated in Church Street as is Lamb's Cottage, which was home to writers Charles Lamb and Mary Lamb.

John Keats, the poet, was apprenticed to surgeon Dr. Hammond in Church Street between 1810-1816. The house was demolished in 1931 to be replaced by Keats Parade. An extant shop carries a blue plaque in commemoration.

Edmonton was the home town of Sir James Winter Lake, director of the Hudson's Bay Company. The company's trading outpost named after Edmonton is now the capital of the Canadian province of Alberta.

The Diverting History of John Gilpin 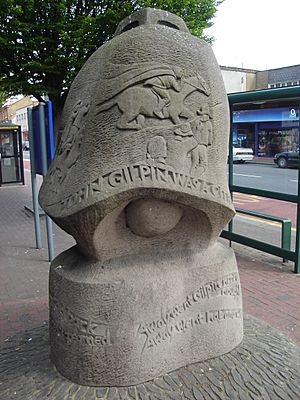 The statue of Gilpin's Bell at Fore Street

Gilpin's spouse decides she and her husband should spend their twentieth wedding anniversary at The Bell Inn, Fore Street, Edmonton. The journey is beset with misfortune from start to finish. Gilpin loses control of his horse which carries him on to the town of Ware ten miles (16 km) distant. On the return journey, Gilpin is still unable to handle his steed, as he once again he fails to stop at The Bell. The horse gallops back to Cheapside much to the dismay of his concerned spouse.

Gilpin is remembered in Edmonton by the statue at Fore Street, the Wetherspoons outlet the Gilpin's Bell public house opposite the site of the original inn and the 1950s council housing Gilpin House in Upper Fore Street.

The railway arrived in 1840 with the opening of the first section of the Lea Valley Line from Stratford to Broxbourne. A station was provided in Water Lane (Angel Road). As the station was badly sited and the trains were slow and expensive, few people used the railway in the early days, preferring the horse buses. In 1845 there were buses every 15 minutes along Fore Street, travelling alternately to Bishopsgate and Holborn.

The single-track line from a junction just north of Angel Road to Enfield Town opened on 1 March 1849, with an intermediate single-platform station at Lower Edmonton, located at the edge of the village green. The service was infrequent and often required a change of train at the junction. This, coupled with the train taking the long way round through Stratford to get to the terminus at Bishopsgate, meant that the railway offered little competition to the existing horse coaches and buses.

The stations were well sited and offered exceptionally cheap workmen's fares of just 2d on trains arriving at Liverpool Street prior to 07:00, 3d on those arriving between 07:00 and 07:30, and half-price returns on those arriving between 07:30 and 08:00. A horse tramway along Fore Street opened in 1881. The tramway was re-constructed and electrified during 1905, lasting until 1938 when trolley buses took over.

The white groups made up 66.1% of the population and thirteen other ethnic groups the remainder.

Edmonton has a young, ethnically diverse population. Satisfaction with the area is as high as for Enfield as a whole with environmental concerns ranking highest.

Since the 1960s, Edmonton has been transformed from a predominantly white, working class industrial suburb into a multicultural area by commonwealth immigration, asylum seekers and with the expansion of the European Union in May 2004.

The Edmonton Green area is currently being redeveloped by St. Modwen Properties. The £100 million project will include new housing, bus station, clinic and refurbishment of the shopping centre. In addition, a 73-room Travelodge hotel will be opened on the development.

Edmonton currently has some of the highest levels of unemployment in Britain, with the recession of the late 2000s pushing unemployment to nearly 14% by 2009.

On 18 June 2011 over 400 people marched through Edmonton to make a stand against gun and knife crime.

As part of the 2012 Summer Olympics preparations, the Olympic torch relay passed through Edmonton on 25 July 2012 at Fore Street en route to Haringey.

Up to 5000 new homes and 3000 new jobs will be created by the £1.5 billion Meridian Water redevelopment on former industrial land by 2026.

Sites or buildings of historic interest

The mostly fifteenth-century church is located in Church Street. It is the oldest building in Edmonton.

A circa 1730 terrace of linked Grade II* Listed Buildings which were altered in the middle of the nineteenth century. 185, 187 and 189 were extensively restored in the 1980s to include the formation of an arch at 187 Angel Place with prize-winning gardens behind. Set back from Fore Street, the A1010 road, and standing close to the junction with the A406 road, the buildings were adjacent to The Angel public house demolished to widen the North Circular Road.

The Grade II listed building is located in Church Street. Designed by J S Alder and opened in 1908. The building today is used as a church.

The former public library (closed 1991) opened in 1897 at Fore Street. Designed by Maurice B Adams with bequests provided by the John Passmore Edwards foundation. Today the Grade II listed building is used as a religious and community centre. (Inside the library by the main entrance were two portrait plaques of Charles Lamb and John Keats by George Frampton, 1908. The plaques can be viewed at Community House, 313 Fore Street, Edmonton).

The roughly triangular shaped Jewish cemetery was founded in 1889 with land given by Samuel Montagu. The walled cemetery is bordered by Salmons Brook which forms part of the Pymmes Brook Trail and a footpath which follows the course of the disused Lower Edmonton low level railway. Rabbi Eliezer Gordon is buried here. The cemetery contains the war graves of 7 Commonwealth service personnel of World War I and 23 of World War II. The entrance is in Montagu Road B137 road. The site also incorporates the Western Synagogue Cemetery founded in 1884 (containing 3 Commonwealth service war graves of World War II) and adjoins the Tottenham Park Cemetery.

The simple yellow brick structure with red brick dressings is located on the south side of Church Street. Initially the school, founded in 1784, had been on a different site. However the benefactor, Obadiah Legrew, grew tired of the children close to his home. He had the original school demolished, drew £170 from the trust, and purchased another plot of land. In 1793 the new school was built afresh, away from his delicate ears. Pupils aged between 7 and 14 were clothed and educated, although the main purpose was to fit them for domestic service. The facade carries a figure of a charity girl and the words A structure of Hope founded in Faith on the basis of Charity. The school closed in 1904.

Formerly known as Bay Cottage. The cottage is believed to have been built in the 1680s and is located in the Church Street conservation area. Writers Charles and Mary Lamb occupied the house between 1833–34, and is where Charles Lamb died. The cottage was sold to its new owners in June 2008.

The late eighteenth-century house has been used as a workhouse school, hospital and a refugee centre before closing in 1971. The house re-opened as an arts centre in 1979 in a complex which encompasses the Millfield Theatre, Millfield Arts Centre and the former Weir Hall Library (closed 2008).

The hospital is located in Sterling Way, Upper Edmonton. Built in 1842 by the Edmonton Board of Guardians as the Edmonton Union Workhouse. A separate infirmary block was opened in 1910. Much of the building was taken over for use as a military hospital in 1915, during World War I, was returned to civilian use in 1920 and renamed The North Middlesex Hospital.

The house dates to the late sixteenth/early seventeenth century, and is the oldest building in Edmonton apart from All Saints' Church. The house which is located in Bury Street West, Lower Edmonton has been a private residence and a school before it was bought by Edmonton council in 1936. The building was established as an arts centre in 1957 (the first to be provided by a local authority in London). In 1992 it underwent a major restoration. The house is Grade II listed along with some of the surrounding walls.

A terrace of twenty five Georgian houses located in the Hertford Road. Built between 1826 and 1851 by a London solicitor. By the late nineteenth century the Crescent had been largely split into flats.

Theatre and the arts

Edmonton is the home of the Millfield Arts Centre and Face Front Inclusive Theatre Company.

All content from Kiddle encyclopedia articles (including the article images and facts) can be freely used under Attribution-ShareAlike license, unless stated otherwise. Cite this article:
Edmonton, London Facts for Kids. Kiddle Encyclopedia.