Chingford is a district of the London Borough of Waltham Forest in North East London, situated 10 miles (16 km) northeast of Charing Cross. Historically a rural Essex parish, it gained urban district status in 1894, and between 1938 and 1965 formed the core of the Municipal Borough of Chingford. Chingford is close to the Essex border of Epping Forest District.

It borders Sewardstone to the north, Woodford Green and Buckhurst Hill to the east and Walthamstow to the south. To the west lie William Girling and King George V reservoirs, known together as the Chingford Reservoirs, and the River Lea. Across these, Chingford is linked with Ponders End through the A110 Lea Valley Road, whilst South Chingford is linked with Edmonton through the A406 Lea Valley Viaduct. To the north and east lies Epping Forest, the most part of which is in Essex but is maintained by the City of London Corporation.

The River Ching runs through the area, and the town of Chingford is close to a number of fords of that river. However, old maps and descriptions give a name for the settlement long before the river has a name and it is likely that the name of the river as "Ching" arose long after the settlement was named. It is also thought that, similarly to how Kingston upon Thames appears in Domesday Book of 1086 as Chingestone and Chingetun(e), with ching being old English for king, that Chingford could refer to the King's river, and Kings Ford. This idea is compounded by links to royalty using the area for hunting in centuries gone by. However, the most generally accepted explanation by place name genealogists is that the settlement's name has its origin as "Shingly Ford"—that is, a ford over a waterway containing shingles. 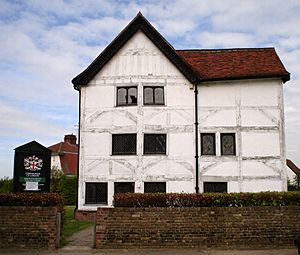 One notable local landmark is Queen Elizabeth's Hunting Lodge. Originally called the Great Standing, it was built for King Henry VIII in 1543, and was used as a grandstand to watch the hunting of deer, although it has been heavily altered over time. The building is located on Chingford Plain within Epping Forest and is open to the public. The lodge is preserved under the Epping Forest Preservation Act.

Originally a barn built in the mid-19th century, Butler's Retreat, a Grade II listed building, is one of the few remaining Victorian retreats within the forest. The building is adjacent to the Queen Elizabeth's Hunting Lodge and takes its name from the 1891 occupier John Butler. Retreats originally served non-alcoholic refreshments as part of the Temperance movement. After closing in 2009 the building was refurbished by the City of London Corporation and re-opened as a cafe in 2012. 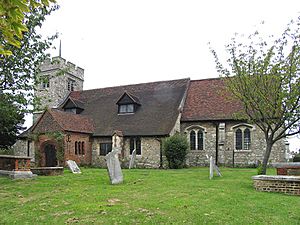 All Saints' Church in Chingford Mount (known locally as the Old Church) dates back to the 12th century. Directly opposite the church is Chingford Mount Cemetery, best known today as the burial place of the Kray family. 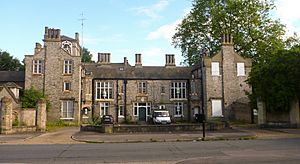 Friday Hill House, Simmons Lane, off Friday Hill, dating from 1839, was a manor house built and owned by Robert Boothby Heathcote, who was both the lord of the manor and rector of the local church. It was he who paid for the building of the church of St Peter and St Paul in Chingford. He is buried in the Boothby family vault in All Saints' Churchyard (Chingford Old Church), Old Church Road. The vault was purchased by Robert Boothby (died 1733), who lived in the previous manor house. The present building has been used as a further education centre, but was put up for sale in 2012.

Pimp Hall Dovecote is situated in a green area at the bottom of Friday Hill and can be viewed by entering the Pimp Hall Nature Reserve. The dovecote, which had nesting space for 250 birds, belonged to Pimp Hall (originally Pympe's Hall), one of three manor houses around Chingford. In 1838 the estate was taken over and became part of the Chingford Earls estate. The farmhouse associated with it survived until just before World War II. This dovecote is depicted in the Millennium Heritage Mosaic on the front of Chingford Assembly Hall. It is the fourth item down on the left-hand-side of the mosaic, also see the Key. There is a local legend telling how on one occasion Charles II was out hunting in Epping Forest and was caught in a snowstorm. He took shelter in Pimp Hall and was so delighted with the food offered him that he jocularly drew his sword and knighted the joint of beef declaring that it was now Sir Loin. Either this story caused the nearby pub on Friday Hill to be called "The Sirloin" or vice versa. 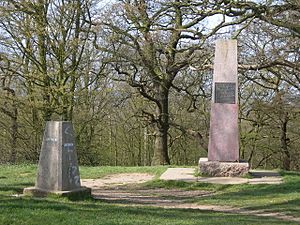 A granite obelisk at Pole Hill was erected in 1824 under the direction of the Astronomer Royal, the Rev. John Pond M.A., to mark true north for the telescopes of the Royal Observatory at Greenwich, south of the Thames. It was placed on high ground along the line of the Greenwich Meridian, but when this was recalibrated later in the 19th century, the obelisk was deemed to have been erected 19 feet (5.8 m) west of the revised meridian line. Today, an adjoining triangulation pillar marks the modern line. 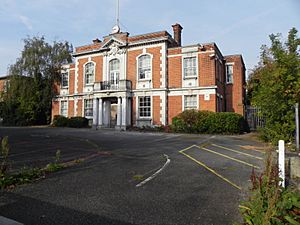 Chingford Old Town Hall, dating from 1929, is on The Ridgeway in Chingford. It has more recently been known as the Chingford Municipal Offices. The site has been sold to property developers and the town hall building subsequently put up for sale itself. 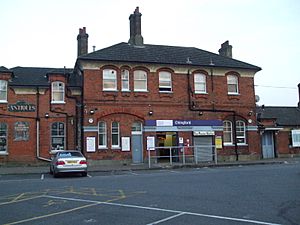 Chingford is served by Chingford railway station which is the terminus of a branch line from Liverpool Street station in the City of London. There is also a station at Highams Park. Chingford lost its rail link to Stratford with the removal of the 500 m length of track known as the Hall Farm Curve in 1970, and there have been campaigns for its reinstatement.

All content from Kiddle encyclopedia articles (including the article images and facts) can be freely used under Attribution-ShareAlike license, unless stated otherwise. Cite this article:
Chingford Facts for Kids. Kiddle Encyclopedia.