Kids Encyclopedia Facts
For other uses, see Ilford (disambiguation).
Not to be confused with Iford, East Sussex.

Ilford is a large cosmopolitan town in East London, England and the administrative headquarters of the London Borough of Redbridge. It is located 9.1 miles (14.6 km) north-east of Charing Cross and is one of the major metropolitan centres identified in the London Plan.

Ilford forms a significant commercial and retail centre surrounded by extensive residential development. It was historically a small rural settlement in the county of Essex and its strategic position on the River Roding and the London to Colchester road caused it to develop as a coaching town. The arrival of the railway in 1839 eventually accelerated that growth and as part of the suburban growth of London in the 20th century, Ilford significantly expanded and increased in population, becoming a municipal borough in 1926. Since 1965 it has formed part of Greater London, but it is still considered by some to be in Essex because of the postal county., despite the Royal Mail no longer using official postal counties.

Ilford is part of the IG postcode area, though areas to the west of Ilford Hill and the A406 are part of E postcode area instead. The population of Ilford, comprising the Clementswood, Loxford, Goodmayes, Newbury, Mayfield, Seven Kings, Barkingside, Clayhall, Redbridge,Green Street, Fullwell, Fairlop, Cranbrook and Valentines wards, was 168,168 in the 2011 census.

Ilford was historically known as Great Ilford to differentiate it from nearby Little Ilford, in the London Borough of Newham. The name is first recorded in the Domesday Book of 1086 as Ilefort and means "ford over the Hyle"; an old name for the River Roding that means "trickling stream". Little Ilford shares the origin.

The only complete skull of a mammoth discovered in the United Kingdom was unearthed in 1860 at the site where Boots the Chemist now stands in the High Road. The skull can now be seen in the Natural History Museum and other prehistoric animal remains can be seen at Redbridge Museum, Central Library, Ilford. Redevelopment has destroyed much of the evidence for early Ilford, but the oldest evidence for human occupation is the 1st and 2nd century BC Iron Age earthwork known as Uphall Camp. This was situated between the Roding and Ilford Lane and is recorded in 18th century plans. Roman finds have also been made in the vicinity. A nearby mound called Lavender Mount existed into the 1960s, when it was removed during building work at Howards chemical works. Excavation has shown that the latter may have been a 16th-century 'beacon-mound'. Archaeological discoveries are displayed at Redbridge Museum. 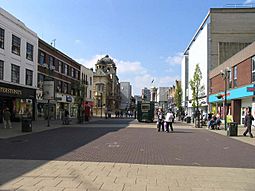 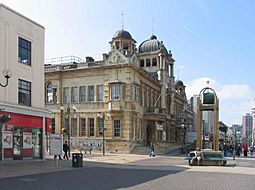 Ilford straddled the important road from London to Colchester. The Middlesex and Essex Turnpike Trust controlled and maintained the road from 1721. The River Roding was made navigable for barges as far as Ilford Bridge from 1737. Ilford remained largely rural until its expansion in the 19th century. This brought about brickworks, cement works and coal yards to service the new buildings, largely centred on the River Roding. In 1839, a railway station was opened on the line from Romford to Mile End. The early businesses gave way to new industries, such as paper making and services such as steam laundries and collar making, to provide for the new commuting class created by the railway. A number of major businesses have been founded in the town, including the eponymous photographic film and chemicals manufacturer Ilford Photo. This was founded in 1879 by Alfred H. Harman, a photographer from Peckham, who established the business in a house in Cranbrook Road making gelatino-bromide 'dry' plates. The business soon outgrew these premises, and its headquarters moved to a site at Roden Street until 1976 when the factory was closed. Many Ilford Limited products are displayed at Redbridge Museum.

The radio, electronics and telecommunications company Plessey, founded in 1917 in Marylebone, moved to Cottenham Road in Ilford early in 1919 and then to Vicarage Lane where became one of the largest manufacturers in its field. During World War II, the factory was heavily damaged by bombing and the company carried out much of its manufacture, with 2,000 workers servicing a production line, located in the underground railway tunnel between Wanstead and Gants Hill. In 1955 the company employed 15,000 workers, in sites throughout Ilford and neighbouring areas, with an extensive research department. BAL-AMi Jukeboxes were manufactured at 290-296 High Road, Ilford, during the 1950s, which also served as the headquarters of the Balfour (Marine) Engineering company. 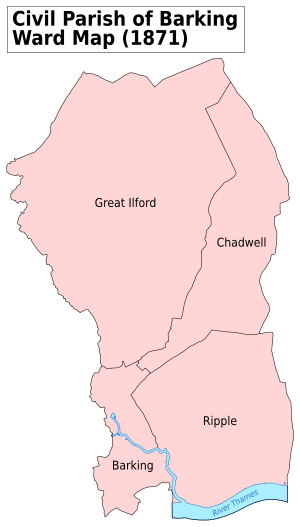 A map showing the wards of Barking Civil Parish as they appeared in 1871. 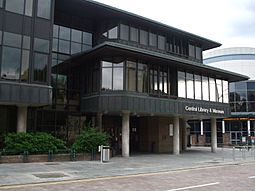 Ilford formed a ward in the large ancient parish of Barking, in the Becontree hundred of Essex. The parish authorities gradually lost responsibility for a variety of functions during the 19th century; from 1836, for the administration of poor relief, Ilford came within the Romford Poor Law Union and in 1840 the Metropolitan Police District was extended to cover the area. In 1875, the Romford rural sanitary district was created, covering a wide area including Ilford. In 1888, Ilford and the neighbouring ward of Chadwell to east were split from Barking and together formed a separate Ilford civil parish. In 1890, a local board of health was set up for the parish, replacing the rural sanitary authority, and in 1894 a reform of local government reconstituted it as an urban district. It formed part of the London Traffic Area from 1924 and the London Passenger Transport Area from 1933. It was incorporated as the Municipal Borough of Ilford in 1926.

The suburban expansion of London caused a significant increase in population and the borough became one of the largest in England not to gain county borough status. In 1965, the municipal borough was abolished and its former area was combined with that of Wanstead and Woodford, the northern extremity of Dagenham and a small part Chigwell Urban District around Hainault; it was removed from Essex and since then has formed the greater part of the London Borough of Redbridge in Greater London.

John Logie Baird, who invented the television, moved to Ilford in the mid to late 1920s to work on his new invention. He worked in a workshop on the roof of the Plessey premises in Ley Street, which has long since been demolished to make way for new housing.

Its proximity to the Olympic Park in Stratford meant that in 2011, Ilford was the fastest-growing tourist destination in Europe due to the London 2012 Summer Olympics.

Ilford is bounded in the west by the North Circular Road and the River Roding and is contiguous with Barking to the south, Gants Hill to the north and Seven Kings to the east. Climate data for Ilford is taken from the nearest weather station at Greenwich, around 6 miles (9.7 km) south south west of the railway station:

Ilford has a very large ethnic-minority population, with Ilford North having the fourth-highest Jewish proportion of residents in the 2001 census. The Hindu, Muslim and Sikh population number some 30,000. The large South Asian community in Ilford speak a variety of languages, including Tamil, Gujarati, Hindi, Bengali, Punjabi and Urdu.

According to the 2001 census, Ilford North and Ilford South consisted of the following demographs:

At the 2011 census, the Clementswood and Loxford wards were ranked the 10th and 12th in Greater London with the least white British population. The Valentines ward is ranked lower but still quite high. The other wards around Ilford are also very ethnically diverse, especially Goodmayes where only 16.9% of residents are White British. In Clementswood, only 9.4% of the population was White British and 66.3% were Asian. 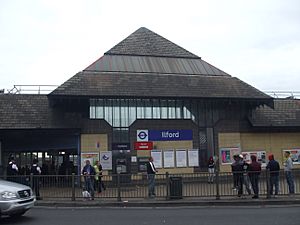 The town is served by Ilford railway station on the Great Eastern Main Line in Travelcard Zone 4. All trains calling at the station are the high-frequency Liverpool Street-Shenfield. This service was taken over by TfL Rail on 31 May 2015 for the new Crossrail project set to run through Ilford in 2017. Gants Hill tube station is located in the north of Ilford and is served by the Central line of the London Underground. It is planned that the Liverpool Street-Shenfield service will be replaced by Crossrail in 2018. The first stage of the East London Transit begins at Ilford.

Ilford is a hub of the London Buses network with services to central London and various suburbs. 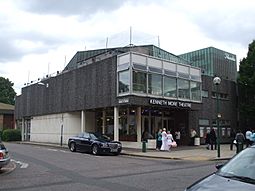 Ilford is the location of the Kenneth More Theatre. The local newspaper, covering the town and the borough, is the Ilford Recorder.

The theatre was officially opened in January 1975. It places emphasis on serving the local community, and stages a mix of professional and amateur productions. Its programme is varied, and runs throughout the year with productions generally changing on a weekly basis. It is well known within the local area for its annual pantomime, which normally runs from mid-December to mid-January.

An unspecified venue in Ilford was used for an important cricket match on Monday, 1 August 1737 between Essex and London, Essex winning by 7 runs. It is the earliest known organised match definitely played in Essex.

Ilford Cricket Club plays home games at Valentines Park. This ground was opened in 1897. It was used regularly by Essex County Cricket Club, but inadequate maintenance meant that the county stopped playing there after 2001.

Ilford has two Non-League football clubs Ilford F.C. and Waltham Forest F.C. who both play at the Cricklefield Stadium.

All content from Kiddle encyclopedia articles (including the article images and facts) can be freely used under Attribution-ShareAlike license, unless stated otherwise. Cite this article:
Ilford Facts for Kids. Kiddle Encyclopedia.