Mile End is a district in the East End of London, England, 3.6 miles (5.8 km) east-northeast of Charing Cross. Situated on the London-to-Colchester road, it was one of the earliest suburbs of the City of London. It became part of the metropolitan area in 1855, and is connected to the London Underground.

It was also known as Mile End Old Town; the name provides a geographical distinction from the unconnected former hamlet called Mile End New Town. In 2011, Mile End had a population of 28,544.

Mile End is recorded in 1288 as La Mile ende. It is formed from the Middle English 'mile' and 'ende' and means 'the hamlet a mile away'. The mile distance was in relation to Aldgate in the City of London, reached by the London to Colchester road. In around 1691 Mile End became known as Mile End Old Town because a new unconnected settlement to the west and adjacent to Spitalfields had taken the name Mile End New Town. This data combines the ethnicity data for Mile End's two wards (Mile End And Globe Town and Mile End East).

Whilst there are many references to settlements in the area, excavations have suggested there were very few buildings before 1300.

Mile End Road is an ancient route from London to the East, and was moved to its present-day alignment after the foundation of Bow Bridge in 1110. In the medieval period it was known as ‘Aldgatestrete’, as it led to the eastern entrance to the City of London at Aldgate. The area running alongside Mile End Road was known as Mile End Green, and became known as a place of assembly for Londoners, reflected in the name of Assembly Passage. For most of the medieval period, this road was surrounded by open fields on either side, but speculative developments existed by the end of the 16th century and continued throughout the 18th century.

The Stepney Green Conservation Area was designated in January 1973, covering the area previously known as Mile End Old Town. It is a large Conservation Area with an irregular shape that encloses buildings around Mile End Road, Assembly Passage, Louisa Street and Stepney Green itself. It is an area of exceptional architectural and historic interest, with a character and appearance worthy of protection and enhancement. It is situated just north of the medieval village of Stepney, which was clustered around St. Dunstan’s Church.

In 1381, an uprising against the tax collectors of Brentwood quickly spread first to the surrounding villages, then throughout the South-East of England, but it was the rebels of Essex, led by a priest named Jack Straw, and the men of Kent, led by Wat Tyler, who marched on London. On 12 June, the Essex rebels, comprising 100,000 men, camped at Mile End and on the following day the men of Kent arrived at Blackheath. On 14 June, the young king Richard II rode to Mile End where he met the rebels and signed their charter. The king subsequently had the leaders and many rebels executed.

In 1883, Jacob P. Adler arrived in London with a troupe of refugee professional actors. He enlisted the help of local amateurs, and the Russian Jewish Operatic Company made their debut at the Beaumont Hall, close to Stepney Green tube station. Within two years they were able to establish their own theatre in Brick Lane.

Novelist and social commentator Walter Besant proposed a Palace of Delight with concert halls, reading rooms, picture galleries, an art school and various classes, social rooms and frequent fêtes and dances. This coincided with a project by the philanthropist businessman Edmund Hay Currie to use the money from the winding up of the Beaumont Trust, together with subscriptions, to build a People's Palace in the East End. Five acres of land were secured on the Mile End Road, and the Queen's Hall was opened by Queen Victoria on 14 May 1887. The complex was completed with a library, swimming pool, gymnasium and winter garden by 1892, providing an eclectic mix of populist entertainment and education. A peak of 8,000 tickets were sold for classes in 1892, and by 1900, a Bachelor of Science degree awarded by the University of London was introduced. In 1931, the building was destroyed by fire, but the Draper's Company, major donors to the original scheme, invested more to rebuild the technical college and create Queen Mary College in December 1934. A new People's Palace was constructed, in 1937, by the Metropolitan Borough of Stepney, in St Helen's Terrace. This finally closed in 1954. 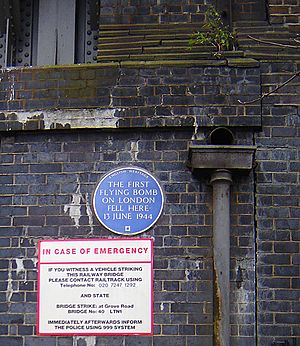 Besides suffering heavily in earlier blitzes, Mile End was hit by the first V-1 flying bomb to strike London. On 13 June 1944, this 'doodlebug' impacted next to the railway bridge on Grove Road, an event now commemorated by a plaque. Eight civilians were killed, 30 injured and 200 made homeless by the blast. The area remained derelict for many years, until cleared to extend Mile End park. Before demolition in 1993, local artist Rachel Whiteread made a cast of the inside of 193 Grove Road. Despite attracting controversy, the exhibit won her the Turner Prize for 1993.

In May 2007 during building work, a live World War II bomb weighing 200 kg was found north of Mile End station near Grove and Roman Roads. Approximately 100 local residents were evacuated and stayed with friends and family or the Mile End Leisure Centre until the bomb could be deactivated and removed.

Mile End is in a part of London known as the East End and home to the main campus of Queen Mary, University of London. Parts of Barts and The London School of Medicine and Dentistry are also based on this campus. The main student halls of residence are also now located on this campus.

The area also boasts an unusual landmark, the "Green Bridge" (known affectionately as the banana bridge, due to its yellow underside). This structure (designed by CZWG Architects, and opened in 2000) allows Mile End Park to cross over the Mile End Road and makes an interesting contrast with the more usual approach of building bridges for cars. It contains garden and water features and some shops and restaurant space built in below.

Mile End as a parliamentary constituency had a reputation as a Labour Party stronghold, but also sent Communist Member of Parliament (MP) Phil Piratin to the House of Commons between 1945 and 1950. At that time, it had a large Jewish population. The area now is covered by the Bethnal Green and Bow and Poplar and Limehouse constituencies.

The nearest London Underground station is Mile End on the District, Hammersmith & City and Central lines.

All content from Kiddle encyclopedia articles (including the article images and facts) can be freely used under Attribution-ShareAlike license, unless stated otherwise. Cite this article:
Mile End Facts for Kids. Kiddle Encyclopedia.