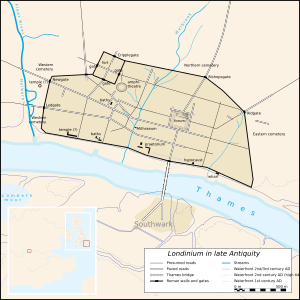 The London Wall was the defensive wall built by the Romans around Londinium. Londinium was then, as now, the most important port town on the River Thames.

All content from Kiddle encyclopedia articles (including the article images and facts) can be freely used under Attribution-ShareAlike license, unless stated otherwise. Cite this article:
London Wall Facts for Kids. Kiddle Encyclopedia.