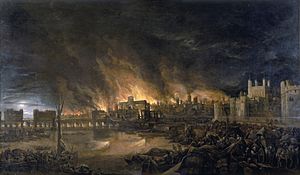 The Great Fire of London, September 1666. Painted by an unknown artist

The Great Fire of London happened in London, 1666. The fire lasted for three days, from 2 September until 5 September.

It threatened the aristocratic district of Westminster (the modern West End), Charles II's Palace of Whitehall, and most of the suburban slums. However, it did not reach these districts. It burned down 13,200 houses, 87 churches, Old St Paul's Cathedral, and most of the government buildings. It is believed that it destroyed the homes of 70,000 of the 80,000 people that lived in the city. It is not known how many people died in the fire. Only a few deaths are certain, but for many of the victims there were no records.

The fire started at the bakery of Thomas Farriner (or Farynor) in Pudding Lane. It began just after midnight on Sunday, September 2 and grew very fast. Firefighters of the time usually made firebreaks by destroying buildings around the fire so it could not spread. This did not happen soon enough because the Lord Mayor, Sir Thomas Bloodworth, was not certain what to do. By the time he ordered such measures, it was too late. The fire pushed north on Monday into the center of the city. Some people thought that foreigners were setting the fires. They believed it was the French and Dutch. Both countries were England's enemies in the Second Anglo-Dutch War, a war that was happening at that time. On Thursday, the fire spread over most of the City, destroying St. Paul's Cathedral and crossed over the River Fleet. It was close to setting fire to Charles II's court at Whitehall.

The attempt to put out the fire is believed to have been successful because of two things:

The social and economic problems created by the disaster were very big. Leaving London to go and live elsewhere was strongly encouraged by Charles II. He feared a London rebellion amongst the refugees who had lost their property. Despite numerous radical proposals, London was reconstructed on essentially the same street plan used before the fire.

All content from Kiddle encyclopedia articles (including the article images and facts) can be freely used under Attribution-ShareAlike license, unless stated otherwise. Cite this article:
Great Fire of London Facts for Kids. Kiddle Encyclopedia.