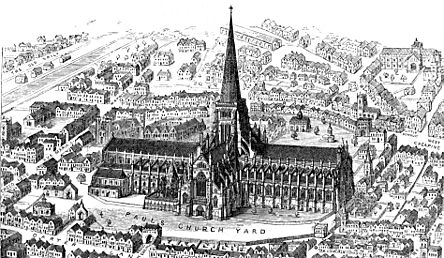 The Cathedral, as it would have appeared in 1561.

Old Saint Paul's Cathedral was the medieval cathedral of the City of London. It was one of the largest churches in northern Europe. It was started in 1087, under William the Conqueror, after a fire destroyed the old cathedral in the same year. It was not complete until 1314. In 1666, it burned down in the Great Fire of London. After that, Christopher Wren built a new cathedral on the same site.

All content from Kiddle encyclopedia articles (including the article images and facts) can be freely used under Attribution-ShareAlike license, unless stated otherwise. Cite this article:
Old St Paul's Cathedral Facts for Kids. Kiddle Encyclopedia.