The Foreign Office in the days of the British Empire 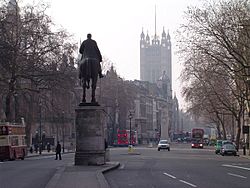 Whitehall, London, looking south towards the Houses of Parliament. The tower is Victoria Tower. 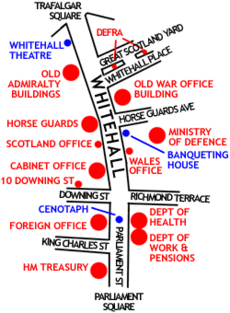 Whitehall is a road in Westminster in London, England. It is the main street running north from Parliament Square, towards traditional Charing Cross, now at the southern end of Trafalgar Square and marked by the statue of Charles I, which is often regarded as the heart of London.

The name "Whitehall" is often used for governmental administration and as a geographic name for the district around it.

Whitehall was originally a wide road that ran up to the front of the palace. Trafalgar Square was built at its northern end in the early 19th century. The southernmost part by Parliament Square is named Parliament Street, but there is no longer any obvious difference between the two on the ground. Combined, the streets cover a total distance of about 0.6 mile (1 km).

All content from Kiddle encyclopedia articles (including the article images and facts) can be freely used under Attribution-ShareAlike license, unless stated otherwise. Cite this article:
Whitehall Facts for Kids. Kiddle Encyclopedia.